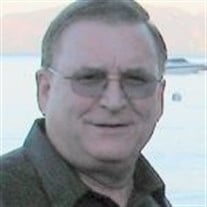 May 2, 1944 – October 28, 2011 William J. Maynard “Bill” age 67, of Green Bay, WI died peacefully with his family by his side on Friday, October 28, 2011 at St. Vincent Hospital in Green Bay, WI. Bill was born May 2, 1944 in Mondovi, WI the son of the now late Melvin & Verdella Maynard. He began his career as a computer programmer for First Wisconsin Bank, transitioned to Cashier/Loan Officer, then made a career change and worked 23 plus years for Wisconsin Public Service Corporation. On April 15, 1967 he married his lifelong love Susan Mantei and they enjoyed 44 wonderful years together. Throughout his life Bill was very social, he never complained, and what made him the happiest was helping others, and spending time with his family and friends. Bill is survived by his wife, Susan, his children Marie (Steve) Voiles of Burlington, WI, and Robert (Ellen) Maynard of Oconomowoc, WI. Three grandchildren, Jacob Fors, Anna and Benjamin Maynard and further survived by sisters Patricia (Howard) Meyer of Chippewa Falls, WI, Barbara (William – deceased) Carbine of Jackson, WI, and very close friends, neighbors, and relatives. Gathering of family and friends will be held at Nativity Parish, 2270 S. Oneida Street on Monday, October 31, 2011 with visitation from 10:00am to 11:30am. Mass of Christian Burial 11:30 A.M. with Rev. John Harper officiating. Burial will be held in St. Germain, WI. In lieu of flowers a memorial fund has been established.

The family of William Maynard created this Life Tributes page to make it easy to share your memories.

Send flowers to the Maynard family.