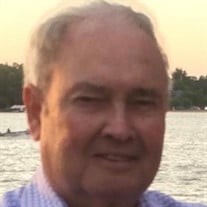 William Joseph Johnston, 03//21/1928 – 11/18/2021, Our beloved husband, father and grandfather passed away peacefully after 93 wonderful years. Born in 1928 at home in Junction City, Kansas and was one of 7 siblings. He graduated in 1946 from St. Xavier’s High School and enlisted in the Army Air Corps. He served proudly from 1946-1949 at Wheeler Air Force Base in Oahu, Hawaii. He was honorably discharged in 1949. He moved from Kansas to Green Bay, Wisconsin and worked at Nicolet Paper Company for 33 years and was a proud member of the Quarter Century Club. He met and married his loving wife Lois Calewarts on May 2, 1953 and they were blessed to celebrate 68 years and had 3 children together. Bill was an avid hunter and fisherman. He and Lois built their cottage on Pelican Lake, Wis in 1974 where he spent many fun filled days teaching his children and grandchildren the joy and art of fishing. He was a long standing member of the American Legion and Sportman’s Club. Bill is survived by his wife Lois, and his 3 children: Howard of Green Bay, Patrick (Sara) of De Pere, and Kathleen (Tim) in Minneapolis, he also had 7 grandchildren and 5 great-grandchildren. He is further survived by nieces, nephews, other relatives and friends. He was preceded in death by his mother: Frances, father: James, and his 6 siblings, James, Robert, John, Arch, Frank and Rose Marie. Friends may call from 9:30 A.M. to 11:30 A.M. on Saturday, December 4, 2021 in the chapel at the Shrine of the Good Shepherd Chapel Mausoleum, 2770 Bay Settlement Road. A Funeral Service will be held at 11:30 A.M. with Rev. Edward Looney officiating. In lieu of other expressions of sympathy a Memorial Fund has been established in his name.

The family of Mr. William J. Johnston created this Life Tributes page to make it easy to share your memories.

Send flowers to the Johnston family.