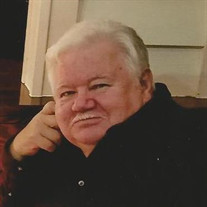 William “Bill” J. Kitzinger 67, New Franken passed away on Friday, January 15, 2016 at his home. Bill was born on December 23, 1948 in Kewaunee, the son of the now late Norbert and Dorothy (Lipsky) Kitzinger. He served his country in the Unites States Army during the Vietnam War from 1969 until his honorable discharge in 1971. Bill married the former Marjorie A. Tombal on December 4, 1971 and together they had 4 children. He was employed as a machinist all of his life and retired from Paper Converting Machine Company. Bill loved the outdoors and was fond of hunting but especially enjoyed the times spent fishing. He was an avid trap-shooter and greatly enjoyed his membership in various leagues and loved trying to compete with his son. Bill always enjoyed animals and never missed an opportunity to visit his daughters dog kennel and play with them. He loved football and was an avid Packers fan and tried to never miss watching a game. Bill is survived by his loving wife Marjorie, his 4 children John (Amy) Kitzinger, Jennifer (Shane) Buhr, Suzan (Jodi) Degenaer, Sara (Keith) Paplhan, 8 grandhchildren Elizabeth, Bo, Sam and Alex Buhr, Skye Kitzinger-Robertson, Olivia Kitzinger, Rykyrr and Ashyrr Degenaer, 3 sisters and 1 brother-in-law Kathy Reignier, Sandy (Jim) Pelishek, Lisa Kitzinger, 1 brother and sister-in-law James (Michele) Kitzinger, his mother-in-law Marie Tombal, a sister-in-law Cindy Ducat. He is further survived by many nieces, nephews other relatives and friends. He was preceded in death by his parents, his father-in-law Melvin Tombal. Gathering of family and friends will be held from 3:00 P.M. to 6:00 P.M. on Thursday, January 21, 2016 at the Ravine 2633 Manitowoc Road. A Service of Remembrance will be held at 6:00 P.M with Pastor Ryan Kibbe of Elevation Church officiating. In lieu of flowers or other expressions of sympathy a Memorial Fund has been established in his name.

The family of Mr. William "Bill" J. Kitzinger created this Life Tributes page to make it easy to share your memories.

Send flowers to the Kitzinger family.