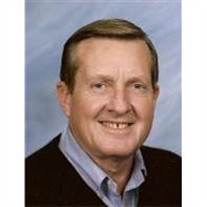 Bill Biebel Maj. William J. Biebel (retired USAF), 67, touched the face of God on Feb. 17, 2009. Born Dec. 9, 1941, Bill was the eldest son of the late John F. Biebel, Jr. and Marie (Burke) Biebel. He married the former Elizabeth (Betsy) Willems Sept. 4, 1965. During a 21-year career with the U.S. Air Force, Bill flew HH 53 “Jolly Green” helicopters, rescuing downed pilots in Vietnam, and later flew B-52 Bombers in the U.S. and Vietnam, serving also as a lead flight instructor for Certified Flight Instructor Course at Castle Air Force Base, Calif. After more than two decades of loyal service to his country, Bill retired from the military in 1985. Returning to Green Bay and a second career with Metropolitan Life, Bill continued to embrace the creed of his helicopter squadron, “That others may live.” His survival and fighter instincts remained intact through his long struggle with cancer. Living and dying, Bill touched many lives. His sense of adventure - before, during and after the military - led him to experiences and activities most men only dream of. He loved acrobatic flying and had a lifelong love of Porsches which he raced at Road America (Elkhart Lake) and Black Hawk Farms (Illinois). He was devoted to family, was a life-long Green Bay Packers fan, and had a special place in his heart for the Hmong people stemming from his military experience. Bill is survived by his wife, Betsy; daughter Kerrie; son Steve (Andrea) and grandchildren Alex and Ella; sisters Bonnie (Gerry) Stadler, Mary (Ray) Ellenberger, Marilyn (Jim) Wittig; brother Marty (Prapai) Biebel; brother-in-law John (Carol) Willems; sister-in-law Carole Willems; nieces, nephews, special cousins, relatives, and friends. Bill was preceded in death by his parents, John and Marie; an infant brother, Jimmy; mother- and father-in-law Bud and Inez Willems; and brother-in-law Michael Willems. A gathering of family and friends will be held Saturday, Feb. 28 at Old St. Joseph Church at St. Norbert College from 10 a.m. until noon followed by the Mass of Christian Burial with Rev.James Baraniak, O. Praem., as celebrant. Interment to follow at Allouez Catholic Cemetery. In lieu of flowers, memorial funds will be established for Unity Hospice and a Nursing Scholarship for Hmong students at Bellin College of Nursing. The family wishes to extend a special thank you to the doctors and staff at St. Vincent Hospital, Green Bay Oncology, and the John and Engrid Meng Residence at Unity Hospice for your compassionate care and support during Bill’s illness

The family of William Biebel created this Life Tributes page to make it easy to share your memories.

Send flowers to the Biebel family.