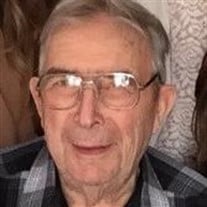 Walter A. Ver Haagh, 88, Green Bay passed away on Tuesday, September 18th, 2018, at Cottonwood Manor surrounded by his family. Walter was the middle child born on May 28th, 1930 in Green Bay to the now late Henry and Frances (Wildgans) Ver Haagh. He helped his father and mother on the farm until he volunteered for the army in 1949. He served during the Korean War until his honorable discharge in 1952. He married Lois Mae Vanden Busch, had a son, Keith, and unfortunately, Lois Mae passed away at an early age in 1958. Walter met and happily wed Romaine Auden and together they had three children: Patrica (Steven) Arneson, Kenneth (Cynthia), and Kevin (Mona) Ver Haagh. The family settled on a farm in Kunesh. Walter also worked for Proctor & Gamble until his retirement. Sadly, Romaine passed away in 1983 leaving a void in the family. Later, Walter married Ruth Rasmussen and added a whole new family-Margie (Francis) Burkel, Michael (Mary) Rasmussen, Kathleen (Larry) O’Neil, Karen (James) Richard, Kristi (Steve) Sarosiek, as well as, several grandchildren and great-grandchildren. He is survived by his loving wife, children, grandchildren, and great-grandchildren; sisters, Adele Vanden Heuvel, Rita Pamperin, Anna Roffers, and Veronica Rudnick; brother Norbert (Elaine) Ver Haagh; and many brother and sister-in-laws. He is preceded in death by brother Joseph, sisters Mary Kimps and Audrey Daul, and many brother and sister-in-laws. He enjoyed helping neighbors, fishing, the cottage, and most of all his grandchildren. He was a loving husband, father, grandfather, son, brother, uncle, and friend to many. He will always be lovingly remembered and sorrowfully missed. We are a family of many branches and Walter loved each and every one. Gathering of family and friends will be held from 4:30pm to 7:00 pm on Sunday, September 23rd, 2018, at Saint Willebrord Catholic Church, 209 S. Adams Street. A Parish Wake Service will be held at 7:00pm. Visitation will continue after 9:00am to 10:30am on Monday, September 24th, 2018 at the church. A Mass of Christian Burial will be held at 10:30am with Rev. Andrew Cribbens O.Praem officiating. In honor and recognition of his faithful service to his country, Military Honor Rites will immediately follow the Mass. Burial at Fort Howard Memorial Park. We would also like to thank the Cardiology Department at Bellin, the staff at the V.A., Unity hospice, and the staff of Cottonwood Manor for their compassionate care.

Walter A. Ver Haagh, 88, Green Bay passed away on Tuesday, September 18th, 2018, at Cottonwood Manor surrounded by his family. Walter was the middle child born on May 28th, 1930 in Green Bay to the now late Henry and Frances (Wildgans) Ver Haagh.... View Obituary & Service Information

The family of Mr. Walter A. Ver Haagh created this Life Tributes page to make it easy to share your memories.