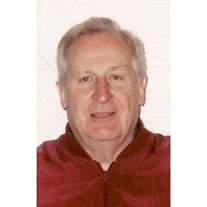 Waldemar Alfred Klein, age 81, of Surprise, AZ, formerly of Milwaukee, WI passed away Wednesday, August 14,2013 at home ,his loving wife at his side, from a lingering illness. Waldemar was born November 27, 1931,son of the late Richard and Louise (Thoms) Klein. He was married to Lorraine Bloedorn on March 25,1975. He joined the US Army in 1949 serving in the Korean Conflict. He was a US Army Veteran hero. He received a purple heart,, Korean Service Medal with one bronze service star, Combat Infantry Badge, Army Occupation Medal (Japan), and UN Service Medal, Korean War Service Medal. Mr. Klein was employed at Otis Elevator as an electrical field engineer. He retired in 1978. Wally enjoyed traveling, bowling, golf and loved spending time outdoors fishing. Wally was an avid Packer, Brewer and Badger Fan. He was a member of Crown of Life Lutheran Church in Surprise, AZ. He is survived by his loving wife, Lorraine of Surprise, AZ. Daughters, Kathleen Klein, and Christine (Rick) Eder, five grandchildren and great-grandchildren of Milwaukee. One brother, Richard Klein of New York. Friend Fred Giardino of New York. Brother-in-law Albert LaPerriere of Elcho, WI. Other nieces and nephews, relatives, and friends. In addition to his parents, he was preceded in death by sister Virginia (Klein) Soper, brother-in-law Raymond Soper, sister Elaine (Klein) LaPerriere, brother Roy Klein. A Memorial Service will be held at 11:00 A.M. with on Saturday, September 21, 2013, With Rev. Dave Hatch at Hansen Family Funeral & Cremation Services 1644 Lime Kiln Road. Wally and Laurie would like to thank Pastor Gary Smith for all of his visits and comforting prayers. A special Thank-you to all of the nurses and doctor in Hospice of the Valley for their compassionate and special care shown to Wally~ Your kindness is most appreciated.

Waldemar Alfred Klein, age 81, of Surprise, AZ, formerly of Milwaukee, WI passed away Wednesday, August 14,2013 at home ,his loving wife at his side, from a lingering illness. Waldemar was born November 27, 1931,son of the late Richard and Louise... View Obituary & Service Information

The family of Waldemar Klein created this Life Tributes page to make it easy to share your memories.

Send flowers to the Klein family.