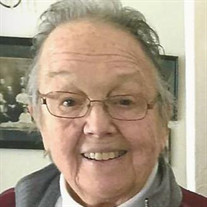 Virginia Ann (Sheehy) Lepp, 82, Green Bay, died peacefully on Tuesday, August 29, 2017 with family at her side. Ginny was born on August 26, 1935 in Green Bay the daughter of the late Walter and Luella Sheehy. From an early age, she showed an irrepressible spirit that compelled her hearty laugh and defined her long, rich life. Ginny was a 1953 graduate from St. Joseph’s Academy. On July 4, 1953 she married Joe Lepp. Ginny worked at McKenna Books and B. Dalton Bookstore where she developed her love of reading. In 1979, she began a 23-year career in the payroll department at Schneider National. Following until her retirement in 2002. Ginny returned annually to Schneider to help during tax season until 2007. Ginny was an avid Packers fan and decades-long supporter of the DePere Deacons, for whom her son David played goalie. She loved bowling – and scored a personal best of 297 (So close!). She also was a skilled basket weaver and card maker. Each Christmas season, Ginny turned her home into a Christmas cottage with multiple trees and her treasured ornament collections. She delighted in treating friends and loved ones to hundreds (if not thousands) of handmade Belgian waffle cookies, painstakingly cooking each side for [xxx] seconds using her family-heirloom galette iron. Ginny’s friends sustained and enriched her. They were part of her daily life and frequently traveled together, whether on annual trips to Alabama or bucket-list treks to Ireland and a two-week African safari. They were together in Lake Tahoe on September 11, 2001, and made the 2,000+-mile drive home in their rental car after planes were grounded nationwide. Ginny is survived by her children Mark (Karen) Lepp, Stephanie (Dick) Kistler, Michael (Julie) Lepp, and David Lepp (Sharon Sandona); her grandchildren Brandon(Natalie), Christian, Karissa (Dave), Bob (Faith), Lindee (Rachel), Michelle (Rob), Nathan (Jenna), Adam (Sarah), Vanessa (Matt), Dryden and Alex, and her great-grandchildren Riley, Ryder, Kaiden, Lukas, William, Simon, Austin, Emmet and Jameson. One brother and sister-in-law John and Joan Sheehy. She is further survived by her extended family Ruth Feldhaus, Kathleen Lepp, Carolyn Allard, Bob and Judy Lepp, Jean and Vic Zinda, Zarella Lepp, nieces, nephews other relatives and friends. Ginny was preceded in death by her daughter Stacie, a grandson Jason, her sister Mary Lou Garsow, her Aunt Florence Hansen. Gathering of family and friends will be held from 9:30 A.M. to 11:00 A.M. on Tuesday, September 26, 2017 at Saint Bernard Catholic Church, 2040 Hillside Lane. A Celebration of Ginny’s Life will be held at 11:00 A.M. with Rev. Mark VanderSteeg officiating. In lieu of flowers a memorial fund has been established in her name. Online condolences may be expressed at www.hansenfuneralservice.com The family would like to extend special thanks to Dr. Anthony Jaslowski at Green Bay Oncology and Manor Care West for all of the wonderful care and compassion. Also, a warm note of appreciation to Ann Russell, Ruth Feldhaus, Sharon Sandona and her lifelong friend Tom Lally for all they did for Ginny~ your loving kindness will never be forgotten.

Virginia Ann (Sheehy) Lepp, 82, Green Bay, died peacefully on Tuesday, August 29, 2017 with family at her side. Ginny was born on August 26, 1935 in Green Bay the daughter of the late Walter and Luella Sheehy. From an early age, she showed... View Obituary & Service Information

The family of Mrs. Virginia A. Lepp created this Life Tributes page to make it easy to share your memories.

Send flowers to the Lepp family.