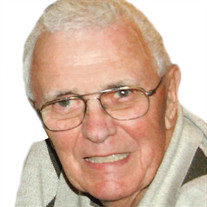 Vincent J. Hermans, 89, went peacefully to be in the arms of the Lord on Friday, March 18, 2016. Often described as “one of the nicest people I have ever met”, Vince was always kind and considerate of the needs of others. Born April 1, 1926, Vince graduated from Central High School on D-Day, June 6, 1944. Soon after graduation he served in the U.S. Army in the Pacific Theater as part of the Army Corps of Engineers, helping to build roads and bridges in the island of Okinawa. This past April he was able to take part in the Old Glory Honor Flight Mission to Washington, D.C., where he and other veterans visited the World War II Memorial and were honored for their service. After returning from the war he graduated from St. Norbert College with a business degree and later passed the CPA exam. Vince worked for the IRS for 18 years before pursuing a career in public accounting, first joining Jack Robishaw and upon Jack’s retirement became partner in the firm McComb, Uphill, & Hermans CPA’s. After the firm merged with a regional CPA firm, Vince decided to go into business for himself, forming the firm of Hermans & Associates, CPA’s, S.C. on January 3, 1983. Vince was preceded in death by his one and only love, Doris (Delfosse) Hermans, his wife of 60 years, whom he married on February 14, 1953 at St. Francis Xavier Cathedral. Vince and Doris loved spending time with their children and grandchildren, especially their time together at the cabin in Crandon, Wisconsin where he loved to go sailing, swimming, fishing, or just relaxing with his family and friends on the porch overlooking peaceful Ground Hemlock Lake. He was very involved in his children’s lives and was always there to support them in their many activities, which carried over to his grandchildren’s activities as well. Vince was also very devoted to his siblings, and for many years met with his brothers, sisters, and spouses for Wednesday morning breakfast at the Holiday Inn River Room. Vince is survived by one daughter and son-in-law Kathy and John Messerschmidt, Green Bay; two sons and daughters-in-law Kevin and Susan Hermans, Green Bay; Matt and Debbie Hermans, Saukville; 9 grandchildren Kyle Hermans, Andrew, Matthew, Michael and Nicholas Messerschmidt, Amanda and Kailyn Hermans, Celeste and Hunter Hermans, 1 sister-in-law Mercedes Hermans. He is further survived by many nieces, nephews, relatives and friends. He was preceded in death by his wife Doris, a son, Brian,. 5 brothers and 4 sisters-in-law Leo Hermans, Harold (Ellen) Hermans, Frank (Gerri) Hermans, Evelyn (Edward) Moudry and Mary (Tom) Hogan, and 4 brothers-in-law and 1 sister-in-law Walter, Orbie, Donald (Emerdine) and Byron Delfosse. We know Vince is resting with the Lord with a smile on his face as he is now reunited with his wife, Doris and their son Brian, who he has missed dearly for 13 years. He will be lovingly remembered and greatly missed by his family and friends. Gathering of family and friends will be held from 4:30 to 7:00 pm on Monday, March 28, 2016 at St. Philip the Apostle Catholic Church, 312 Victoria St. A prayer service at 7:00 pm will end the evening. Visitation will continue on Tuesday, March 29, 2016 from 9:00 to 10:30 am at St. Philip the Apostle Catholic Church. Mass of Christian Burial will be held at 10:30 am. Entombment will be at Allouez Chapel Mausoleum. In lieu of flowers, a Memorial Fund has been established with donations being given to the YMCA, Old Glory Honor Flight, or other charities of your choice. The family would like to offer a warm note of appreciation to the staff at Allouez Parkside for all their wonderful care for Vince during his short stay.

Vincent J. Hermans, 89, went peacefully to be in the arms of the Lord on Friday, March 18, 2016. Often described as &#8220;one of the nicest people I have ever met&#8221;, Vince was always kind and considerate of the needs of others. Born April... View Obituary & Service Information

The family of Mr.. Vince Hermans created this Life Tributes page to make it easy to share your memories.

Send flowers to the Hermans family.