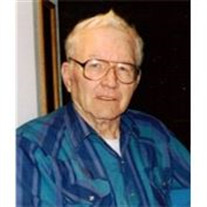 Veeser “Smitty” Smith, 78, Green Bay passed away on Wednesday, October 10, 2007 at a local hospital. Veeser was born on February 26, 1929 in Tipler, Wisc the son of the late Louis and Molly (Reed) Smith. Smitty served his country in the United States Army until his honorable discharge in August of 1948. On July 29, 1950 he married the former Gwenith Thrasher at First Presbyterian Church in Kenosha and the couple enjoyed over 57 years together. He was a truck driver at heart working for Allied Van Lines, WG&R Furniture and Supervalu Inc where he retired from in 1991. Smitty liked spending time outdoors and liked it even more when he was fishing, either “up-north” or in Canada. He had a knack for card playing and was always up for a rousing game of cribbage with his family or friends. Smitty enjoyed watching football whether it was the Packer’s or a favorite college team he would root them on from his chair. He had a marvelous sense of humor and got a kick out of playfully teasing his family-he could always make you smile. Smitty was a loving husband, father, grandfather, brother and a great friend who will always be lovingly remembered and sorrowfully missed. Veeser is survived by two sons and daughters-in-law Reggie and Joyce Smith; Gary and Alecia Smith, two daughters Sheila (Robin) Smith, Nina (Jeff) Smith;15 grandchildren, 25 great-grandchildren, 1 great-great-grandchild; a sister Iva Cole, a brother and sister-in-law Earl and Eileen Smith, two sisters-in-law Phyllis Smith, Marvel Smith. He is further survived by many nieces, nephews other relatives and dear friends. He was preceded in death by one daughter Sandra, a great-granddaughter Tianna, three sisters and three brothers-in-law Nova (Edward) Lemke, Cora (Tom) Apostle, Beulah Smith, Norman Cole, three brothers and one sister-in-law Ray (Louise) Smith, Merle Smith, Louis Smith In Honor of Smitty’s wishes a Graveside Service will be held at 11:00 A.M. on Saturday October 27, 2007 at Martin’s Cemetery in Tipler. There will be a time of reflection and sharing with the family at 1:00 P.M. at FlatLanders in LongLake. OnLine condolences may be expressed to the family at www.hansenfuneralservice.com The family would like to offer a warm note of appreciation to the staff of St. Mary’s Hospital 3rd floor ICU for all of their loving care and gentle compassion.

The family of Veeser Smith created this Life Tributes page to make it easy to share your memories.

Send flowers to the Smith family.