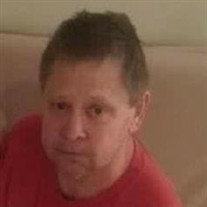 Timothy “Tim” M. Kloida, 55, Green Bay went to be with the Lord on Tuesday, August 18, 2015. Tim was born on November 27, 1959 in Marinette, WI the son of the now late Donald and Charlestta (Jessel) Kloida. He attended Marinette High School. Tim was employed at Mc Donalds as a cook for many years and enjoyed being in the kitchen either at work or at home and loved making booyah and salsa. He had met the love of his life over 25 years ago Sue Harper and the 2 of them built their life together. He was a brother Knight in the Knights of Columbus Msgr. Borusky Council #10243. Tim had a heart of gold and was a loving person who would do anything for anyone.. Tim is survived by his fiance’ Sue, his children Kevin Kloida and his girlfriend Heaven, Timothy “Tim” Kloida Jr., Melissa Harper, Joshua Delvaux and Tracey Delvaux, 7 grandchildren Dakota, Dayton, Basil, Donald, Levi, Lashawn, Layla, 1 sister Ann Walters, 2 brothers and one sister-in-law Donald Kloida, Kenny (Patty) Kloida. He is further survived by Sue’s family, many nieces, nephews other relatives and friends. He was preceded in death by 1 brother-in-law Roger Walters and one sister-in-law Linda Kloida. Gathering of family and friends will be held from 9:00 A.M. to 11:00 A.M. on Saturday, August 22, 2015 at Saint Bernard Catholic Church 2040 Hillside Lane. A Funeral Service will be held at 11:00 A.M. with Rev. Mark Vandersteeg officiating. The family would like to offer a special note of appreciation to Bellin Memorial Hospital especially the staffs of the 2nd floor ICU and 4th Floor for all of their loving care and attention shown to Tim~ your kindness will never be forgotten.

The family of Mr. Timothy Kloida created this Life Tributes page to make it easy to share your memories.

Send flowers to the Kloida family.