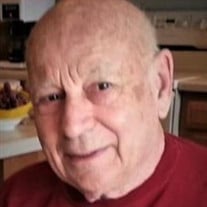 Thomas I. Holschuh passed peacefully to his Eternal Home on Wednesday, January 5th, 2022. Tom was born in July of 1935 to Irwin and Theresa (McCabe) Holschuh and attended St. Patrick’s grade school followed by Catholic Central high school. He graduated in 1957 from St. Norbert College with a Bachelor’s degree in Business Administration. From a very young age Tom worked in the family business (Cherry Transit Lines) and met his wife of 62 years (Joyce Tlachac) while driving bus to Sturgeon Bay. Heavily involved in the Green Bay community, Tom served terms as President of the Chamber of Commerce, Director of Green Bay City Transit, and additionally was on numerous transportation-related boards and committees until retiring from the busing industry in 1999. Tom was quite mechanically gifted and enjoyed any task or hobby where he could employ his skills. Teenage summers filled with cars, boats, and waterskiing grew into fixing anything for a friend or neighbor. One of Tom’s proudest accomplishments was donating his talents to St. Vincent DePaul, where he helped to keep the shelves stocked with any donated item he could repair. He is survived by his beloved wife Joyce and five children: Mark (Pat), Richard (Julie), Ann (Rahn), Steven, and Nancy (Chris). Tom and Joyce were blessed with thirteen grandchildren: Matt, Alex, Brett, Tom, Mary, James, Sarah, Jon, Joseph, Audrey, Elizabeth, Grace, and Elaina as well as two great grandchildren: Becket and Cody-Jean (with more on the way!). Tom is further survived by his sister, Donna Haanen. Due to health-safety concerns there will be no wake. A private funeral mass will be held at St. Willebrord’s Church. The funeral mass will be livestreamed Saturday, January 15th at 10:30 A.M. on the St. Willebrord Facebook page. Online condolences can be left at www.hansenfuneralservice.com. A celebration of Tom’s life will be held at a future date. In lieu of flowers, the family suggests donations to either St. Willebrord’s Catholic Church or St. Vincent DePaul.

The family of Mr. Thomas "Tom" I. Holschuh created this Life Tributes page to make it easy to share your memories.

Thomas I. Holschuh passed peacefully to his Eternal Home on Wednesday,...