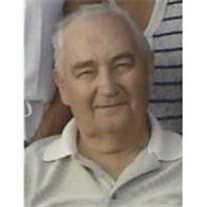 Thomas P.“Tom” Schaller, 76, Luxemburg passed away unexpectedly on Friday, June 13, 2014 at Aurora Baycare Medical Center. Tom was born on December 24, 1937 in Mt. Prospect, IL to the son of the now late Hans and Marie (Wunderlich) Schaller. On July 9, 1960 he married the former Jeanne Skaletski at SS Cyril & Methodius Catholic Church in Eaton. Growing up on a golf course Tom’s father instilled a dedication and pride in him that was proven in his 37 year career as the Golf Course Superintendent at Northbrook Country Club until his retirement in 2007. Tom loved spending time outdoors and especially enjoyed the times spent hunting. He was a die hard Packer (Brett Favre) fan and loved to watch them with his family. He will be remembered as a fun loving, witty person who loved to “tease” the people he cared for the most. Tom is survived by his wife Jeanne, his children Steven (Amy) Schaller, Florida; Jody (Tim) Renard, New Franken; David (Shelly) Schaller, California; Kim Koss and her fiance’ Steve, Green Bay; Lisa (Pete) Schmelter, Green Bay; 9 grandchildren Devin, Davis, Nathan, Max, Brett, Alycia, Taylor, Kori and Brooke, 1 brother Gerald “Mike” Schaller, 1 sister Hertha Otto, 7 brothers-in-law and 8 sisters-in-law. He is further survived by many nieces, nephews other relatives and friends. He was preceded in death by 1 brother Fritz, 1 sister Trudy(Mertens) and 2 brothers-in-law Richard Mertens, Jerry Otto, two brothers-in-law and one sister-in-law. Gathering of family and friends will be held from 9:00 A.M. to 11:00 A.M. on Wednesday, June 18, 2014 at Immaculate Conception of Mary (St. Mary’s Parish) 1412 Main Street, Luxemburg. A Mass of Christian Burial will be held at 11:00 A.M. with Rev. Milton Suess officiating. In lieu of other expressions of sympathy a memorial fund has been established. The family would like to offer a warm note of appreciation to Gary and Peggy for all of their friendship, love and care through the years. Also, a special thank-you to his good friends Tom and Debbie for all of the fun times and memories on their various travels.

The family of Thomas Schaller created this Life Tributes page to make it easy to share your memories.

Send flowers to the Schaller family.