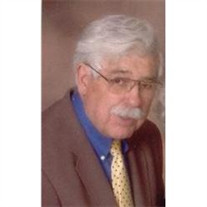 Thomas “Tom” J. McKeough, 85, Green Bay passed away on Monday, September 08, 2008 at his home surrounded by his family. Tom was born on November 17, 1922 in Green Bay, son of late Cyril and Loretta (Engels) McKeough. He was a graduate of St. Matthew Grade School and St. Norbert High School. Tom pursued his education at Saint Norbert College where he was involved in their R.O.T.C. program. He served his country in the United States Army during WW II in the European Theatre and was wounded twice receiving the Purple Heart with Cluster. Tom was honorably discharged in February of 1946. On September 21, 1946 he married the former Beatrice Goggins at St. Patrick Catholic Church. He was employed at Weyerhaeuser Lumber Company for over 39 years retiring in 1984 as a District Manager. Tom was a proud father of six children. He enjoyed time “up North” at the family cottage on East Bass Lake in Fence, WI. Tom played bridge most often with his lifelong partner, Bea. He was very active in the community and served two terms as Green Bay Alderman/Supervisor for the 1st Ward. Tom was a lifelong member of the Sullivan-Wallen American Legion Post #11 where he served on the Executive Committee. He was also a member of the Golden Knights of Saint Norbert College. Tom served on the Finance Committee of Saint John the Evangelist Church as well as a member of the church choir and was an original member of the Green Bay Boys Choir. He was an Eucharistic Minister at the church and also distributed Communion at Bellin Memorial Hospital. Tom also volunteered at the Saint Vincent de Paul Society. He was preceded in death by his infant brother Lawrence. Tom is survived by his loving wife Beatrice, his children Mary (Kenneth) Mikolajczak, Barbara McKeough, Mark (Kim Gianelo) McKeough, Elizabeth (Lee) Garrow, Loretta (Martin) Darby, Clare (Scott) Lundstrom, three grandchildren Juli Mikolajczak, Ian Lundstrom and Aidan Lundstrom, one brother and sister-in-law Bernard (Bonnie) McKeough, one sister Mary Shelley (Albert “Bo” - deceased), one sister-in-law and two brothers-in-law Dorothy (Rodney) Crevcoure, Lyle Hinkley. He is further survived by nieces, nephews, relatives and friends. Gathering of family and friends will be held on Thursday, September 11, 2008 from 4:00 P.M. to 7:00 P.M. at Saint John The Evangelist Catholic Church 413 St. John Street. A Rosary Service will be held at 7:00 P.M. Visitation will continue after 9:30 A.M. on Friday, September 12, 2008 at the church until the time of the Funeral. Mass of Christian Burial 10:30 A.M at the church with Rev. Guy Blair SCJ, officiating with Rev. Brendan McKeough and Msgr. James Feeley concelebrating. Burial at Allouez Catholic Cemetery. In lieu of flowers Memorial Donations may be made to St. John’s Homeless Shelter 413 St. John’s Street Green Bay, WI 54301 ~or~ The Saint Vincent de Paul Society 1529 Leo Frigo Way Green Bay, WI 54302.

The family of Thomas "Tom" McKeough created this Life Tributes page to make it easy to share your memories.

Send flowers to the McKeough family.