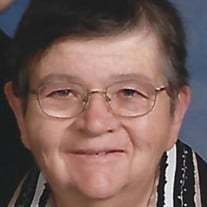 Allouez- December 21, 2021, Theresa M. Jadin received the most precious gift for Christmas, an invitation to celebrate the birth of Jesus in Heaven. Oh, it is just like Theresa to go early to check out her new home and get reacquainted with family and friends before the celebration. She was born July 21, 1944, to Peter and Martha (Gorzelanczyk) Jadin on farm in Luxemburg. Theresa graduated from Luxemburg High School in 1962. School was difficult due to side effects from a childhood illness. Her curiosity and love of reading served her well throughout life. “Why?” was a frequent word for her. Theresa worked for Packerland Packing and later McDonalds. She retired in 2007 after a ruptured brain aneurysm and a second stroked 3 months later. She often told the story of being at the Pearly Gate, but her name wasn’t in the book so she had to go back. A walker became her constant companion after these medical issues. Theresa had a great faith. She said the rosary daily, did Bible study, and read many religious books. She checked the obituaries for deceased veterans, and prayed for them and their families. When her caregiver had to leave for errands, Theresa often said God was in the car and would bring her caregiver safely back home to her. Hours were spent doing adult coloring and word searches. She often became very vocal during Packer games and enjoyed UWGB girls basketball. Her love of reading surpassed all other activities. Theresa had more than 100 Chicken Soup books prior to giving many away for others’ enjoyment. She volunteered at Heritage Hill and the Haiti Mission. Meeting and talking to people during her neighborhood walks made walking more enjoyable. At times teasing and talking to the neighbor’s dog was a substitute. Covid wasn’t easy for Theresa. She liked being with people. Activities at Resurrection Catholic Church, Memory Cafe, Spark program at the museum and Bellin Stroke Support Group were all curtailed. After another ruptured brain aneurysm this past Easter, Theresa worked hard to achieve her goal of riding the recumbent bike on the Fox River Trail on her 77th birthday with the Stroke Group. It was exhausting but pure joy. Left to cherish Theresa’s unique personality include her siblings James Jadin, Raymond (Jean) Jadin, Sister Rita Jadin, Rose Mary (Al) Pelishek, Geralyn “Jerri” Jadin, nephews and nieces, great nephews and nieces, great-great nephews, other relatives and friends. Our loss was Heaven’s gain. Celebrating Theresa’s arrival include her parents, grandparents, nephew John Jadin and many relatives and friends. After her fifth brain bleed, Theresa waited patiently to be called to her heavenly reward; however, wondered at times why it was taking so long. She said maybe it was because she might not fit through the Pearly Gate. Leave it to Theresa to come up with such an idea. It must not have been a problem after all. She is now walking among the angels. Theresa dealt with multiple health issues during her life and would not want anyone attending her funeral to risk their health. Therefore, no public gathering will be held. Instead say a prayer. Do a good deed. We all need more kindness to get through this pandemic. Private entombment will be held at Nicolet Memorial Gardens. Theresa requested no flowers; rather she wanted any donations to benefit the living. Theresa wished to express her gratitude to all who helped her along the way, including Dr. Cynthia Lasecki, and her staff, CP Aquatic Center, Bellin’s Inpatient Rehab, Home Health and Outpatient Therapies. Special thanks goes to the staff of Unity’s Meng Hospice Residence and all who visited her there these past months. You were a ray of sunshine in her day. REST IN PEACE DEAR THERESA

Allouez- December 21, 2021, Theresa M. Jadin received the most precious gift for Christmas, an invitation to celebrate the birth of Jesus in Heaven. Oh, it is just like Theresa to go early to check out her new home and get reacquainted with... View Obituary & Service Information

The family of Theresa M. Jadin created this Life Tributes page to make it easy to share your memories.

Send flowers to the Jadin family.