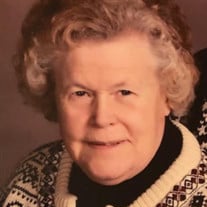 Sylvia Guldseth Sjolie (July 11, 1932 - December 27, 2020) was born in Beijing, China, where her parents, Gustav Guldseth, MD, and Elsie Nummedal Guldseth, RN, were serving as medical missionaries. Sylvia graduated from High School at Augustana Academy in Canton, SD, and trained to be a Registered Nurse at Fairview Hospital School of Nursing in Minneapolis, Minnesota. Sylvia had great respect for music and was a gifted singer and cellist. On August 31, 1957, Sylvia married James Sjolie. They lived in St. Paul, MN for two years while James completed his studies for the ministry at Luther Seminary. He was ordained on May 31, 1959. Sylvia gave birth to three children, Elsa, Martin, and Sarah. The family lived in parsonages in Kerkhoven, MN (1959-63), Wells, MN (1963-70), and Montevideo, MN (1970 – 84), where their three children graduated from High School. The Sjolies served a parish in Barron WI from 1984-93 and in 1993 bought their first home in Bayfield, WI, where they remained until 1997. Sylvia worked as a nurse in hospitals and nursing homes in Montevideo and Barron and was a Hospice nurse in Bayfield, and James served the community as pastor of two congregations in Bayfield and Cornucopia. In 1996, the couple retired and a year later moved to a home in Duluth. In 2013, they relocated to Nicolet Highlands in De Pere. The two attended many music events on the SNC campus and in the Fox Valley community. Sylvia passed away at the age of 88 on December 27, 2020, at Unity Hospice in De Pere. She was a life-long diabetic and breast cancer survivor. Sylvia is survived by her husband, James Enger Sjolie; her daughter and son in law, Elsa Ruth and Rob Calhoon, of Lake Nebagamon, WI; her son Martin of Seattle, WA; her daughter and son in law, Sarah and Andrew Parks of De Pere, WI; her grandchildren, Elin Ruth Erickson and her husband Arjun Soundararajan; Emily Erickson Raycraft and her husband Anthony Raycraft; Liesa Erickson and her fiancé Kenneth Wolleat; and Anna and Eric Parks. A virtual memorial service is being planned. Memorial gifts may be given to Unity Hospice in De Pere, ELCA World Hunger, or the choice of the donor.

The family of Mrs. Sylvia Sjolie created this Life Tributes page to make it easy to share your memories.

Send flowers to the Sjolie family.