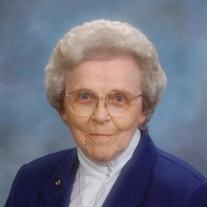 Sister Bridget Stumpf, age 92, a member of the Sisters of St. Francis of the Holy Cross, died Thursday, June 6, 2019, at St. Francis Convent. Sister Bridget (Marion Rosella) Stumpf was born September 29, 1926, in Darboy. Her parents were the late Joseph & Isabel Wallace Stumpf. She entered the Sisters of St. Francis of the Holy Cross in 1947, professed vows in 1950, and celebrated her 70th Anniversary in 2018. Sister Bridget graduated from Holy Angels School, Darboy, in 1940 and St. John High School, Little Chute, in 1944. She earned a Bachelor of Science Degree in Elementary Education from St. Norbert College, De Pere, and advanced studies at the College of St. Teresa, Winona, Minnesota; and an MA in Education from the University of Detroit. She spent many dedicated years as a teacher and principal in the schools in the Diocese of Green Bay. Many more years were devoted to ministry within the Community as Community Treasurer, Secretary and Librarian. Since 2013 her ministry has been community service at the Motherhouse. Sister Bridget is survived by the Sisters of St. Francis of the Holy Cross and Associates; her brothers Patrick (Phyllis), Combined Locks; Paul (Ruth), Kaukauna; Thomas, Kaukauna; Joseph (Joan) Darboy, John (Lynn) Morrison, CO; her sisters Doris (Roger) George, Kaukauna; Ellen Lamers, Darboy; and Kathleen, Darboy. Preceding her in death were her parents, Joseph and Isabel; brothers Eugene and Harvey; sister, Alice; sisters-in-law Shirley, Theresa, Casilda, and Ann; brother-in-law Herman Lamers. Friends may call at St. Francis Convent, 3110 Nicolet Drive, Green Bay on Sunday, June 9, at 4:00pm for the Reception of the Body and Visitation. The Vigil Service will be at 6:30pm. Visitation for Sister Bridget will continue on Monday, June 10, at Holy Cross Church, 3009 Bay Settlement Road, from 9:00am until the Funeral Mass at 10:00am with Father Tim Shillcox, O. Praem officiating and Father Michael Brennan, O. Praem and Father Walter Stumpf concelebrating. Burial will be in the convent cemetery. The family of Sister Bridget and the Sisters of St. Francis thank the nursing staff at St. Francis Convent for their loving care and support.

The family of Sister Bridget Stumpf created this Life Tributes page to make it easy to share your memories.

Sister Bridget Stumpf, age 92, a member of the Sisters of St....

Send flowers to the Stumpf family.