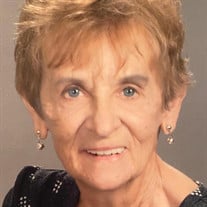 Shirley M. Smith, 78, Green Bay, went to her Heavenly home being greeted by her daughter Brenda and her parents on Sunday, November 14, 2021. Shirley was born on May 16, 1943 in Wausau, the daughter of the now late Alvin and Doretta (Hartwig) Ploeger and spent her younger years in the Eldron area. Her family then moved to Black River Falls during her Junior Year on homecoming weekend in the fall of 1959 where she met her soul mate Jim at the parade. After graduation from High School, she attended beauty school and started her career until they started a family when she became a full time mom. On June 2, 1962, Shirley and Jim were united in marriage at St. John’s Lutheran Church, when Jim had finished Marine Boot Camp. Shirley loved quilting and belonged to a club, along with sewing and made beautiful clothes for children and then later on her grandchildren which they still have to this day. Shirley’s most favorite thing to do though was shopping with her girls. Shirley is survived by her husband of almost 60 years: Jim, 2 daughters and 3 sons-in-law: Rhonda (Mike) Verheyen, Kathy (Russ) Phillips, Gary Mullen, 8 grandchildren: Brooke (Travis) Miller, Ryan (Regan) Harrison, Amanda (Andy) Kloehn, Brian (Laura) Kaster, Thomas Mullen, Sammi (Jake) Last, Noah Harrison and his fiancé: JennaWeir, and Lucas Mullen, 11great-grandchildren: Autumn, Owen, Andi, Tucker, Brayden, Grayson, Callum, Austin, Raelynn, Hunter and Faerynn. She is further survived by her in-laws, nieces, nephews, other relatives and friends. She was preceded in death by her daughter: Brenda Mullen, 1 great-granddaughter: Jayda Miller, 1 sister and brother-in-law: Donna (James) Hayes. Gathering of family and friends will be held from 9:30 A.M. to 10:45 A.M. on Monday, November 29, 2021 at Ascension Lutheran Church, 2911 Libal Street, Allouez. A Funeral Service will be held at 11:00 A.M. with Rev. Lori Swenson officiating. Entombment at Allouez Chapel Mausoleum at a later date. In lieu of flowers a memorial fund has been established in her name. The family would like to offer a warm note of appreciation to the staffs of Unity Hospice for all of their loving care and compassion~ your kindness will never be forgotten and you are truly all Angels here on Earth.

Shirley M. Smith, 78, Green Bay, went to her Heavenly home being greeted by her daughter Brenda and her parents on Sunday, November 14, 2021. Shirley was born on May 16, 1943 in Wausau, the daughter of the now late Alvin and Doretta (Hartwig)... View Obituary & Service Information

The family of Mrs. Shirley M. Smith created this Life Tributes page to make it easy to share your memories.

Send flowers to the Smith family.