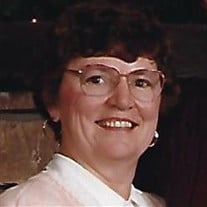 Sally A. Lotz, 76, De Pere, passed away on Monday, February 4, 2019. Sally was born on December 12, 1942, in New London, the daughter of the now late Howard and Grace (Carew) Griffin. She grew up in Manawa and graduated from Manawa High School with the class of 1960. On September 17, 1960 she married Thomas “Tom” Lotz at Sacred Heart Catholic Church in Manawa. The couple enjoyed over 43 years together, Tom preceded her in death on June 11, 2003. They moved to Big Rapids, Michigan as their family grew, while Tom attended Ferris State University in the Pharmacy Program. Sally and Tom spent many years moving throughout the Midwest raising their family and Tom pursuing his career as a Pharmacist. They settled in Kewaunee where they owned and operated the local Pharmacy in town. Sally was very faith filled with a servant’s heart and never missed an opportunity to make a difference in her church, family, and community. She had many passions in life, but her greatest gift was serving others and giving selflessly to her family. Sally also enjoyed working at the pharmacy, where she saw many of her old friends and made new ones. She loved traveling and visiting new places, while making memories with her husband, family, and friends whom she cherished and was devoted. Sally was a loving wife, mother, grandma, sister and a friend to many and will always be lovingly remembered and sorrowfully missed. Most of all, Sally’s love for God, her husband Tom, her children, grandchildren, and family were the heart and soul of her life here on earth. Sally is survived by her 4 children; Jeff Lotz and his special friend Julie, Todd (Lori) Lotz, Ann Van Egeren and her special friend Mark, Kathy (Tom) Zellner, 14 grandchildren; Kody, Kaitlen, Kirsten, Aubrey, Paige, Abe, Cordell, Jordan, Max, Jack, Hillary, Evan, Grace, William, 2 sisters and 1 brother-in-law; Patricia Martin, Ellen (Frank) Fura, 6 brothers and 4 sisters-in-law; Jack (Sue) Griffin, Dennis (Tana) Griffin, Tom Griffin, Gene (Joy) Griffin, Jerry Griffin, Pete (Mary) Griffin. She is further survived by her beloved nieces and nephews, other relatives and friends. She was preceded in death by her father and mother-in-law; Irvin and Marie Lotz, 1 brother-in-law; Tom Martin, 1 sister-in-law; Barb Griffin. Gathering of family and friends will be held from 3:00 P.M. to 7:00 P.M. on Friday, February 8, 2019 at Holy Rosary Catholic Church, 519 Kilbourn Street, Kewaunee. A Vigil Service will be held at 7:00 P.M. Visitation will continue from 9:00 A.M. to 10:45 A.M. on Saturday, February 9, 2019 at the Church. A Mass of Christian Burial will be held at 11:00 A.M. with Father Alvan Amadi officiating. In lieu of flowers and other expressions of sympathy a Memorial Fund has been established in her name. The family would like to offer a warm note of appreciation to all of her neighbors who thoughtfully looked out for her, especially Nick and Dana, Ryan and Katelyn~ your kindness will never be forgotten.

Sally A. Lotz, 76, De Pere, passed away on Monday, February 4, 2019. Sally was born on December 12, 1942, in New London, the daughter of the now late Howard and Grace (Carew) Griffin. She grew up in Manawa and graduated from Manawa High School... View Obituary & Service Information

The family of Mrs. Sally A. Lotz created this Life Tributes page to make it easy to share your memories.

Send flowers to the Lotz family.