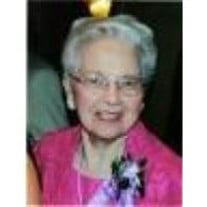 Sadie Marie Delwiche, formerly of Green Bay, 95, died Tuesday, December 30, 2008 at the Capitol Lakes Terraces Center in Madison. She was born September 29, 1913, in the Town of Burke, to Nels and Emma (Reindahl) Stolen. She graduated from Madison East High School and from the University of Wisconsin in 1935 with a degree in dietetics. She worked as a hospital dietitian at hospitals in Philadelphia, Milwaukee and Madison. She married Richard Delwiche on October 17, 1941. Theirs was a marriage of love, devotion and respect. For most of their married life, they lived in Green Bay. Richard died on January 1, 1998. She and Richard raised five children in Green Bay in a home filled with love, support, and the fragrance of superb home cooking. As a mother, she was always available to her children. Her advice was frequently sought and always appreciated. She was an accomplished homemaker, cook, seamstress and a trusted counselor to her wide circle of family and friends. She was a longtime and active member of the Catholic Women’s Club. She loved music and was a member of the McDowell Club of Green Bay and of many other community and church organizations. In later years, she and Richard volunteered at Heritage Hill State Park and Sadie was well known for her portrayal of “Auntie Cotton.” She and Richard were longstanding members of St. Matthew Catholic Church in Allouez and were both active in many church activities and services. Sadie was a devout Christian, and put to work the Christian principles of love, charity and forgiveness. She was quietly involved in feeding poor families, making quilts and clothing for the sick and the indigent, and cheering the lives of children. In her 50s, she returned to college to take the necessary courses to be certified as an elementary school teacher. For several years she taught at St. Matthew School. As a teacher, she was both loved and respected by her students and their families. She was the ideal grandmother to 14 grandchildren, always treating them as unique individuals. She never forgot a birthday, often making gifts by hand –gifts that her grandchildren will always treasure. She never bragged but was quietly proud of the accomplishments of her children and grandchildren. She is survived by her children, Susan (Donald) Jauquet of Green Bay, Peter (Ann) Delwiche of La Crescent, Minnesota, Jane Considine of Portage, Wisconsin, Barbara (Bill) Feeney of Brooklyn, Wisconsin, and Patricia (Steve Antonius) Delwiche of DeKalb, Illinois. She is also survived by 14 grandchildren, Michael Jauquet, Mary (Peter) Fahndrich, Andrew (Beth) Jauquet, Siri (Joseph) Carpenter, Luke Delwiche, Ellen Considine, Katy Considine, Ana Considine, Suzanna Considine, Jesse Kipp, Dana Kipp, Benjamin Antonius, Joseph Antonius, Laura Antonius, and two great-granddaughters, Grace and Alia Carpenter. She is also survived by two brothers, Ingman (Margaret) Stolen of Madison, and Sidney Stolen of Edgerton, and by a sister-in-law, Mildred, of Wausau. She is also survived by many nieces and nephews, many of whom had a close relationship with their Aunt Sadie. In addition to her husband Richard, she was preceded in death by an infant son, Thomas, by sisters and brothers Siri Anderson, Theresa Olsen, Eleanor Jones, Dean Stolen and Andreas Stolen, and by numerous brothers- and sisters-in law. A memorial service will be held in the Madison area on Sunday, January 4 at Burke Lutheran Church, 5720 Portage Road with visitation scheduled for 3 p.m. and a memorial service at 4 p.m. Pastor James Koza, chaplain at Skaalen Home, will officiate. Funeral services will be held in Green Bay at St. Matthew Church, 130 St. Matthew St., on Tuesday, January 6, with visitation at 9 a.m. and a funeral Mass at 11 a.m. Rev. Larry Seidl, pastor of St. Matthew parish, will officiate. Interment at Allouez Catholic Cemetery. In lieu of flowers, memorial gifts can be made to the Sadie and Richard Delwiche Scholarship Fund through the University of Wisconsin Foundation, to the Skaalen Benevolent Fund at Skaalen Home in Stoughton, Wisconsin, to the Heritage Hill Foundation in Green Bay, or to the HospiceCare Foundation of Madison. The family offers profound thanks to God for the life of Sadie Delwiche. We are also deeply grateful to Skaalen Home, to the Capitol Lakes Assisted Living Center, and to HospiceCare of Madison for their excellent care. “Safe in the Arms of Jesus”

Sadie Marie Delwiche, formerly of Green Bay, 95, died Tuesday, December 30, 2008 at the Capitol Lakes Terraces Center in Madison. She was born September 29, 1913, in the Town of Burke, to Nels and Emma (Reindahl) Stolen. She graduated from Madison... View Obituary & Service Information

The family of Sadie Delwiche created this Life Tributes page to make it easy to share your memories.

Send flowers to the Delwiche family.