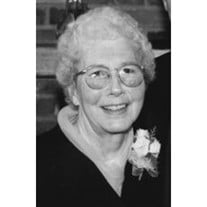 RoseMary (Maenner) Holschuh passed away peacefully on June 3, 2014. She was born June 17, 1927 in Eau Claire to John and Josephine (Wilhelm) Maenner. RoseMary married James Holschuh Sr. on June 23, 1962. She will be sadly missed by her husband,... View Obituary & Service Information

The family of RoseMary Holschuh created this Life Tributes page to make it easy to share your memories.