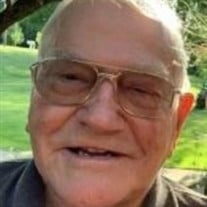 Ronald “Ron” C. Brice, 86, a life long Bellevue resident, passed away on Monday November 16, 2020. Ron was born on September 22, 1934, the son of the now late Harold and Hazel (Kornowski) Brice. He went to a two room school in Bellevue. Ron contracted Polio when he was 9 years old but thankfully due to his father’s quick response and knowledge of the disease, they transported Ron down to Milwaukee where he received treatment and made a full recovery in part also to the March of Dimes. On September 25, 1954, he married the girl across the street, Carol Guns at St. Philip the Apostle Catholic Church. Ron started Brice Masonry in 1958 and knew the value and importance of a hard days work and never forgot this and instilled this into his children. In 1979, Ron decided to hand the ropes over to his son Tony and semi retire, but due to his nature he couldn’t stay idle. He stayed in the construction industry remodeling homes, and various types of construction and always stayed active. At the age of 74, he put in a fireplace in one of his children’s homes and decided that was going to be his last fireplace. He had the knack, knowledge and will to do anything he put his mind to and was still building outside structures even as late as last year, and he never forgot who he was and where he came from. Throughout, all of his busy career he became the first building inspector for Bellevue and proudly represented the community. Ron left many footprints in this world, from his family, to his neighborhood, to his profession, and made such a positive impact and was a role model to so many- in the way that he lived his life. Ron was a very faith filled servant and when the opportunity arose to teach CCD at St. Philip’s he continued God’s work with children. Ron is survived by his loving wife: Carol, his children: Pam (Keith) Domke, Tony (Dorothy) Brice, Cheri (Kevin) Lasee, Al (Karen) Brice, Marty (Brenda) Brice, Jeanne (Paul) Godschalx, 18 grandchildren, 22 great-grandchildren. one sister and brother-in-law: Joyce (Pete) VandenBerg, four sisters-in-law: Luella Froelich, Marilyn Guns, Doris Brice, one brother-in-law and sister-in-law: Jim and Sally Guns. He is further survived by nieces, nephews other relatives and friends. He was preceded in death by two brothers: Jerry Brice, Dan Brice , one sister and brother-in-law: Germaine (Bob) Matzke, his brothers-in-law and sisters-in-law: Ray and Arlene Guns, Wencil Froelich, Isabel and Rich Puyleart, Ursula and Ray Puyleart, Laverne and Don Delaruelle, Bob Guns and Gordy and Joyce Guns, Gathering of family and friends will be held from 9:00 A.M. to 11:00 A.M. on Thursday, November 19, 2020 at Prince of Peace Catholic Church, 3425 Willow Road, Bellevue. A Mass of Christian Burial will be held at 11:00 A.M. with Rev. Dennis Ryan officiating. Entombment at Allouez Chapel Mausoleum. To watch the funeral being live streamed on-line please visit the Facebook page of Prince of Peace Parish found at popgb54311 to view the Mass starting at 11:00 A.M. In lieu of flowers a Memorial Fund has been established in his name. The family would like to offer a warm note of appreciation to the staffs of the Aurora Oncology Team made up of the receptionists, nurses and doctors for all of their loving care and concern. Also, a special thank you to Unity Hospice for their kindness and compassion.

The family of Mr. Ronald "Ron" C. Brice created this Life Tributes page to make it easy to share your memories.

Send flowers to the Brice family.