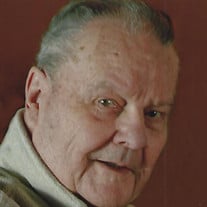 Roger Lee Aldrich, 90, Green Bay, passed away peacefully on Saturday, November 7, 2020 with his son and daughter by his side. Roger was born on June 7, 1930 in Green Bay, the son of the late Arthur Verl and Esther (Laduron) Aldrich. Roger’s ancestors came from Preble, New York in the 1830’sand were the founders of the Town of Preble, WI , which was later incorporated into the City of Green Bay in 1964. Roger was a graduate of Green Bay East High School with the class of 1948. Roger was a successful salesman with Panasonic Corporation and Toshiba Corporation . During his career he was able to overcome the obstacles and stigma of buying foreign made products in a time when most things were ideally “Made in America.” His children remember always having the “latest in stereo equipment and electronics” as teenagers. Later in his sales career, he worked for a label manufacturer traveling throughout Wisconsin. His ability to be outgoing, funny, brash, and his astonishing talent to spin stories and jokes made him stand out and endearing to his customers. His clients knew him to be fair and honest; and he always left them with a smile and laughter. Roger loved sports from an early age and was a skilled golfer, never missing an opportunity to spend time with his buddies hitting the links and having a “soda pop” out at Royal Scot Golf Course. He was an outdoorsman in his younger years and loved bird hunting (especially pheasants and ducks) with his friend, Dewey Johnson. Roger was best known for his sense of humor and ability to tell a good joke. He had a fun-loving, positive, and youthful outlook on life. Roger is survived by his children and grandchildren: Thomas (Debbie) Aldrich, Tyler (Liz), Katie, Halle, Green Bay; Kay Baker, Kyle, Inga, Essex, CT; Timm (Deidre) Aldrich, Dani, Blake, San Antonio, TX; Kurt (Mary) Aldrich, Abby, Garrett, Fort Worth, TX; Amy Aldrich, Green Bay; Jennifer (Andria) Aldrich, Sturgeon Bay. He is survived by the mother of his children, Lois Mae (Lambert) Pierquet. He was preceded in death by his father and mother: Arthur Verl and Esther (Laduron) Aldrich; and his step-mother: Daisy (Maas) Aldrich. In accordance with Roger’s wishes, a celebration of his life will be held at a later date. Roger will be laid to rest at the Chauncey Aldrich Family Cemetery, located off Humboldt Road in Green Bay. The family would like to offer a warm note of appreciation to the staff of Carrington Manor, especially Ashley, Courtney, Krystal, David, and Jessica, for all of their loving care and devotion shown to Dad. Also, a special thank you to Heartland Hospice, especially Traci, for all her kindness and compassion. Lastly, a heartfelt note of gratitude to the caregivers we didn’t mention by name. Our father’s care would not have been complete without all of you.

Roger Lee Aldrich, 90, Green Bay, passed away peacefully on Saturday, November 7, 2020 with his son and daughter by his side. Roger was born on June 7, 1930 in Green Bay, the son of the late Arthur Verl and Esther (Laduron) Aldrich. Roger&#8217;s... View Obituary & Service Information

The family of Mr. Roger L. Aldrich created this Life Tributes page to make it easy to share your memories.

Send flowers to the Aldrich family.