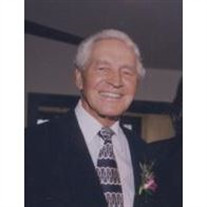 Robert Edward Zimonick, Green Bay, WI, peacefully entered Heaven on February 13, 2010. He was born July 28, 1917 in Green Bay to Edward F. Zimonick and Bertha Erdman Zimonick. He graduated from East High and Beloit College. Bob served as a captain in the US Air Corps and as Flight Instructor from 1941-1945. In 1942 Bob married June Traupmann in Fresno, CA. After the war he worked for Morley Murphy Co., Van Drisse Motors as Sales Manager, Van Drisse Lincoln Mercury as President and Manager, and in 1970 he became President and Manager of Y & D Leasing, associated with Don Yineman and Don Dorsch, where he remained until his retirement in 1992. Bob was active in the Salvation Army for over 56 years as a member of the Advisory Board and was chairman for several years. He was appointed a Lifetime Member and also received the Others Award. He was also very proud of his many years of bell ringing during Christmas time. Bob was a member of Kiwanis Club, the Children's Service Society, a board member of UWGB Founders Club, and former board member of Oneida Golf Club and the Allouez School Board. Bob and June enjoyed many happy years at their A Frame in northern Wisconsin, Aprils in Arizona, and trips to Hawaii, Canada, and Colorado. Bob is survived by his wife, June, and their 3 children, Bonnie Snider, Robert (Barbara) Zimonick, and Scott (Janet) Zimonick; 8 grandchildren: Christine Snider, Elizabeth (Robert) Bellamy, and Mike (Sarah Fitzgibbons) Snider, Zeke (Tina) Zimonick, Jill (Sam) Zirnheldt, Aerin Zimonick, Cindy (Curt) Brownlee, and Drew Zimonick; 5 great grandchildren, Carson, John Robert, Micah, Vaida, and Zoe, with 2 more due this summer.He is also survived by his sister, Eileen Krumdick, and brothers, Richard (Jean) Zimonick and James (Yvonne) Zimonick, and many neices and nephews. He was preceded in death by his parents and sisters Dorothy Plinske, Jean Webster, Maguerite Heilmann, and son-in-law Robin Snider. Bob was a true gentleman and faithful friend, and had the gift of serving. When June opened her decoupage studio years ago, he backed her financially, emotionally, and physically. He was fondly known at the studio as the "Original Green Bay Packer." When June's arthritis became disabling, Bob insisted on being her primary caregiver. The family wishes to thank all the loving care Bob received this past year from the loving, caring people at St. Vincent's Hospital, Rennes Rehab Center, Renaissance Assisted Living, and Unity Hospice. At Bob's request, there will be no visitation. A Funeral Service will be held at 11:00 A.M. on Thursday, February 18, 2010 at Pilgrim Congregational Church 991 Pilgrim Way with Rev. Scott Naevestad officiating In lieu of flowers, donations may be made to the Salvation Army or Pilgrim Congregation Church, 991 Pilgrim Way, Green Bay, WI 54304.

The family of Robert "Bob" Zimonick created this Life Tributes page to make it easy to share your memories.

Send flowers to the Zimonick family.