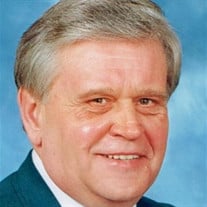 Robert (Bob) Daniel La Frombois Sr. passed with peace and grace on Sunday, April 28, 2019, surrounded by family. He was 78. To know Bob was to love him. What’s not to love about a man whose sense of humor and quick wit could bring out the best in anyone? A man who touched many lives with his warmth, sunny disposition, and laid-back demeanor. Bob was born in Green Bay in 1940 to Russell and Alice (Rasmussen) La Frombois. After high school, he went on to serve in the U.S. Navy Reserve. Bob owned a gas station and later went on to become an optician for most of his adult life. In retirement, he enjoyed driving truck. Nearly as much as Bob loved his children, grandchildren, and great grandchildren, his zest for life included his Green Bay Packers, picnics at Bay Beach, red licorice, a spirited game of cribbage, lively debates, and taking his dog, Boomer, to McDonald’s. Bob was fascinated with the valuation of precious metals and enjoyed recovering copper. Bob’s journey with A.A. began in 1979. By learning to live humbly “one day at a time,” he marked 38 years of sobriety in the years that followed. Bob held strongly to his Christian beliefs and “higher power.” He will be loved, revered, and held dear to our hearts as we recall one of his favorite sayings, “God grant me the serenity ….” Bob will be deeply missed by his daughters and son-in-law’s Annette (Rick) Nitke, Abrams, Wis.; Trina (Tim) Taylor, Minneapolis, Minn.; sons Bob (Sherri) La Frombois, Suamico, Wis.; Steve (Carrie) La Frombois, Suamico, Wis.; and Rick (Kara) La Frombois, Wausau, Wis.; and Sister Judy Mobasseri, Howard, Wis. He will be missed by dear friends Nancy Donckers (mother to his children) and Geri La Frombois (second wife) and her son Michael Moore. All of his friends in the A.A. Recovery Community and the many friends he met and befriended over the years, too, will miss him. He was a proud grandfather to Gary Pearson Jr., Matthew Pearson, Jeramy Nitke, Jillian La Frombois, Robert La Frombois III, Logan La Frombois, Sam Burn, Ana Taylor, Wyatt Taylor, Owen La Frombois, Caleb La Frombois, Quinn La Frombois, and Delaney La Frombois, and proud great grandfather to Zoe and Mia La Frombois, and Matthew Thomas Pearson. Bob was preceded in death by his beloved son David La Frombois, parents, Sister Phylis Kornowske, brother Russell La Frombois Jr., stepson Joseph Nitke. Bob’s family would like to extend a warm and sincere thank-you to Dr. Matthias A. Fuchs, Katie Hampton, Dr. Amy Ann James, the Bellin nursing staff, and Unity Hospice for their loving care. Bob will be laid to rest at Woodlawn Cemetery in Green Bay alongside his son, David. Please join Bob’s family and friends for a Celebration of Life gathering on Saturday, May 4, from 1–3:30 p.m. at The Rite Place in Bellevue for one of Bob’s favorites, a bowl of booyah!

Robert (Bob) Daniel La Frombois Sr. passed with peace and grace on Sunday, April 28, 2019, surrounded by family. He was 78. To know Bob was to love him. What&#8217;s not to love about a man whose sense of humor and quick wit could bring out... View Obituary & Service Information

The family of Mr. Robert Daniel La Frombois Sr. created this Life Tributes page to make it easy to share your memories.