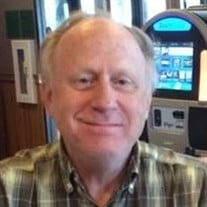 Robert “Bob” F. Gerlach, 72, Green Bay, – Father, brother and friend, Robert “Bobby” passed away at home on Wednesday, February 5th 2020. Robert was born on October 4, 1947, in Green Bay the son of the now late Carl and Evelyn (Kessler) Gerlach. He retired from the United States Postal Service after 35 years, volunteered for several committees, and served in the United States Army from 1968 to 1974. Robert also enjoyed dabbling in gemology under the expertise of Bill Brice. He enjoyed helping the residents in his apartment complex by performing numerous tasks, playing cards with friends, watching the Brewers and Packers, and cooking. He really enjoyed spending time traveling with his close friend Ellen Stoller and her family. He always made sure that his friends and family had whatever they needed, even if it meant that he would go without. He volunteered as an usher at many local parishes, gave without expectations and believed that the little things you did for others was worth more than gold. He is survived by two sons: Andrew (Amy) Gerlach, Leon Gerlach and his special friend: Sarah Magro, two grandchildren: Amelia and Isaac, his brothers and sisters and their spouses: David (Pam) Gerlach, Tom Gerlach, Jim (Judy) Gerlach, Anne Gerlach and her dear friend Mary Lou Pigeon, Tim (Linda) Gerlach, Jo (Steve) Sato, Jane Gerlach, Jack “John” Cavanagh He is further survived by nieces, nephews, other relatives and friends. Robert is preceded in death by his siblings: Nancy Gerlach, Carolyn Cavanagh, and Kathy (Tom) Stites. Gathering of family and friends will be held from 9:00 A.M. to 10:30 A.M. on Wednesday, February 12, 2020 at St. Willebrord Catholic Church, 209 S. Adams Street. A Mass of Christian Burial will be held at 10:30 A.M. with Rev. Andrew Cribben O.Praem officiating. Burial at Fort Howard Memorial Park. The family would like to offer a special and heartfelt thank-you to the staffs and community of Parkway Highlands Apartments for always being there for him and making him a part of the family. Also, a note of appreciation to the first responders for all of your efforts~ your compassion will never be forgotten.

The family of Mr. Robert F. Gerlach created this Life Tributes page to make it easy to share your memories.

Send flowers to the Gerlach family.