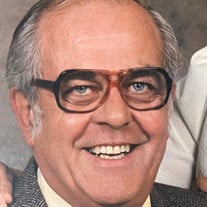 Robert “Bob” A. Roeser, 92, Allouez, passed away on Thursday, June 2, 2022 at a local hospital. Bob was born on July 19, 1929, in Green Bay the son of the late Anton and Geraldine (Neuser) Roeser. He was a graduate of Central Catholic High School with the class of 1947. On August 20, 1949, he married the former Shirley Dantoin at SS Peter & Paul Catholic Church and the couple enjoyed over 53 years together. Shirley preceded Bob in death on November 11, 2002. Bob was employed at Bark River Culvert Company and Aring Equipment Company. He started his sales career and started two companies Rae-Cor Distributing and Allouez Supply until his retirement. Bob was a lifelong Packer fan and enjoyed stories about going to games at City Stadium. He enjoyed spending time at his cottages at Chute Pond and in Sturgeon Bay. Bob was the designated and enjoyed being the camp cook at Deer Camp, and was hard to beat at Horseshoes. He loved spending time in his workshop and could build or repair almost anything. Bob was a loving husband, father, grandfather who will be lovingly remembered and dearly missed. Bob is survived by one daughter and son-in-law: Joan and James Hasseler, Green Bay; one son and daughter-in-law: Joel and Kathy Roeser, De Pere; two granddaughters: Betsy Hasseler and Hope Roeser and her fiance’ Chet. He is further survived by other relatives and friends. He was preceded in death by and infant daughter: Carolyn, and one son: James Gathering of family and friends will be held from 10:00 A.M. to 11:00 A.M. on Thursday, June 9, 2022 at St. Francis Xavier Cathedral, 140 S. Monroe Avenue. A Mass of Christian Burial will be held at 11:00 A.M. with Rev. Brian Belongia officiating. Entombment at Allouez Chapel Mausoleum. The family would like to offer a special thank you to the Doctors and Nurses of Aurora BayCare Medical Center especially Dr. Andrea Akpoguma for all of the care and concern. Also, a warm note of appreciation to Fr. Brian Belongia and Bob’s Parish family at the Cathedral for all of their prayers and support.

The family of Mr. Robert "Bob" A. Roeser created this Life Tributes page to make it easy to share your memories.

Send flowers to the Roeser family.