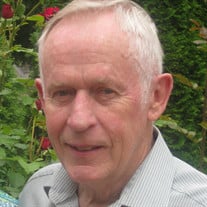 Robert “Bob” J. Badeau Sr. 84, passed away on Friday, September 21, 2018 at home surrounded by his family after a courageous and hard fought battle with cancer. Bob was born on June 5, 1934 in Green Bay the son of the now late David Sr. and Helen (Jolly) Badeau. On October 28, 1961 he married the former Sharon Kreuser at Annunciation Catholic Church and the couple had 4 children Tammy, Candy, Bob Jr, and Joy. In his early years Bob was a home builder and took great pride in his work and was a quality builder. Bob later joined and became a member of the Carpenters Union Local #1146 for many years until his retirement in 1996. He had many interests in life but was most fond of his collection of gas memorabilia and coca-cola items. Bob had a genuine servants heart and never hesitated to help those in need and always gave freely of his time. He loved his family and cherished the times spent together. Bob was a loving and devoted husband, father, grandfather, and a friend to many and will always be lovingly remembered and sorrowfully missed. Bob is survived by his loving wife Sharon and his children Tammy (David) Albers, Candy (Randy) Garsow, Bob Jr. (Tami) Badeau, Joy (Brian) Farrell, 11 grandchildren Cynthia (Robert) Barker, Matthew (Amanda) Albers, Alyssa, Austin and Landon Garsow, Aaron (Mattea) Badeau, Ryan (Katelyn) Badeau, Emily (Nathan) Hochrein, Katie, Josh and Claire Farrell, 7 great-grandchildren Ezra, Asher, Maelynn, Robert, Houston, Katrina and Caleb and one on the way, 1 brother and 1 sister-in-law David Jr. (Nancy) Badeau. He is further survived by nieces, nephews other relatives and friends. He was preceded in death by 2 great-grandchildren Hope and Grace. Gathering of family and friends will be held from 9:00 A.M. to 11:00 A.M. on Tuesday, September 25, 2018 at New Hope Presbyterian Church 2401 Deckner Avenue. A Funeral Service will be held at 11:00 A.M. with Rev. Jim Ferguson officating. Entombment at Shrine of the Good Shepherd Chapel Mausoleum. In lieu of flowers a free will offering will be collected on behalf of Bob. The family would like to offer a warm note of appreciation to the staffs of Unity Hospice, The Vince Lombardi Cancer Center and Dr. Amritha Karkera for all of their loving care and concern.

The family of Mr. Robert "Bob" J. Badeau created this Life Tributes page to make it easy to share your memories.

Send flowers to the Badeau family.