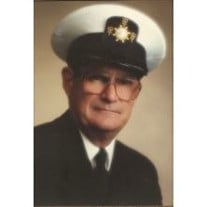 Richard (Dick) Seibert, Sr. 1929-2007 Dick Seibert died peacefully on Thursday, October 25, 2007 at the Jack and Engrid Meng Residence on the Unity Hospice Campus in De Pere. He was born May 6, 1929, in Reading, Pennsylvania to Gertrude and S. Neitz Seibert Sr, S. Neitz died when Dick was three; in 1939, Gertrude married Mike Rudy who became a father to Dick. Dick graduated from Lafayette University in 1951 with a degree in mechanical engineering. Dick married Barbara Simmons in 1951, and they lived in Schenectady, NY, Philadelphia, Chicago and Milwaukee before settling in their true home of Green Bay. Dick spent thirty years with Paper Converting in Green Bay, retiring in 1992. His travels as a sales engineer took him all over the United States and Mexico City, enabling him to make many friends. Sailing became a great passion for Dick; he spent three decades in the United States Power Squadron, achieving the office of Rear Admiral. He and his family owned a series of ever-larger boats, sailing on the Great Lakes and the North Channel. After retirement, Dick joined the Dudley Birder Choir which brought him deep satisfaction. Dick and Barbara traveled extensively in Europe, including visits to the Baltic States and St. Petersburg, but the highlight of their travels came when Dick traced and met his German relatives. They shared many warm moments together. Dick Seibert is remembered and held in the hearts of his survivors: wife Barbara of Green Bay, daughter Lynn Daniels (Peter) of Shawano, WI, son Rick Seibert (Kristi) of Boulder, CO, and grandsons Ben Daniels of Madison and Matt Daniels of Shawano. A Gathering of family and friends will be held on Monday, November 5, 2007 from 12:00 P.M. to 1:00 P.M. at First United Presbyterian Church 605 N. Webster Avenue. A Service of Remembrance will be held at 1:00 P.M. at the church with Rev. Ted Tromble officiating. The family requests that in lieu of flowers, donations in Richard’s name be sent to: Unity Hospice 2366 Oak Ridge Circle De Pere, WI 54115

Richard (Dick) Seibert, Sr. 1929-2007 Dick Seibert died peacefully on Thursday, October 25, 2007 at the Jack and Engrid Meng Residence on the Unity Hospice Campus in De Pere. He was born May 6, 1929, in Reading, Pennsylvania to Gertrude and... View Obituary & Service Information

The family of Richard Seibert created this Life Tributes page to make it easy to share your memories.

Send flowers to the Seibert family.