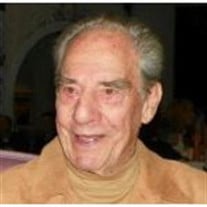 Richard Louis (Dick) Kumpfer, 91, most recently of DePere, WI passed from this world into his Savior’s loving arms Sept. 3, 2014 after a short illness just 3 days short of his 92nd birthday. He was born Sept. 6, 1922 in Chicago, IL to the late Frederick William and Ruth Emma (Kahlenberg) Kumpfer. On April 19, 1944 he married Leona Louise Krabbenhoft and faithfully and lovingly stayed by her side for 61 years. She preceded him in death June 14, 2005 in Sturgeon Bay, WI. As a member of “The Greatest Generation”, Dick very proudly served his country during WWII as a paratrooper instructor. His many adventures in his 91 years have made for many “Grandpa stories” that will be passed on for generations. Dick had a kind, gentle charm about him that left a lasting impression on almost everyone he met. Grandpa Dick is survived by 2 daughters; Susan (Dave) Wilson, Orono, MN, Lynne (Bob) Drake, Minocqua, WI and 1 son; Keith (Terry) Kumpfer, Kewaunee, WI. He is also survived by 6 grandchildren; Stacy Wilson (Steven Gagne), Dr. Megan Wilson (Eric Ferguson), Ric (Ashley) Drake, Dr. Keri (Adam) Keith, Dr. Justin (Sarah) Kumpfer, and Jacob (Alexandria) Kumpfer. He was also blessed with 9 precious great-grandchildren; Ella, Clare, Owen and Peter Gagne, Colin Ferguson, Benson Drake, Ainsley Keith, Lily Kumpfer and Arianna Kumpfer. He also leaves behind a very special friend, Mrs. Barbara Gigot. Dick was also loved very much by Barbara’s family, and his good friends, Kay, Helen, Mary, and Bunny. The family would like to thank the wonderful and caring staff at Aurora ICU and Hospice. You went above and beyond to not only care for Dick’s physical needs, but also to get to know him as a person and make his last days as special as his prior 91 years. A special thanks also goes to Dr. Johnson. Your care and kindness will not be forgotten. Cremation will take place with a private family memorial.

The family of Richard Kumpfer created this Life Tributes page to make it easy to share your memories.

Send flowers to the Kumpfer family.