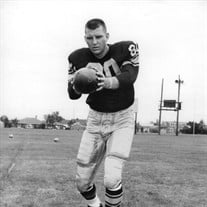 Richard “Dick” Deschaine, 87, of Green Bay passed away peacefully on Sunday, May 20, 2018. Dick was born on April 28, 1931 in Menominee, MI the son of the now late Jerry and Anna (Dobeck) Deschaine. He was a graduate of Menominee High School with the class of 1949, of which he was class president. Dick was just recently inducted to the first of class, inaugural Menominee High School Athletic Hall of Fame on May 5th, 2018. He lived the dream of so many young football players by not only receiving a tryout from the Green Bay Packers, but earning a spot as a punter specialist and spending four productive years in the NFL, compiling a career average of over 42 yards per punt. He played for both the Green Bay Packers and the Cleveland Browns. He has been recognized by Packer Historians as the most talented punter in Packers history. Recreational sports were also a huge part of his life. Dick played baseball for the Menominee Indians of the Northern States League and played fast pitch softball during the summers. One season Dick batted .500 with 17 home runs in 15 games in the M&M fast-pitch league. Whether he was playing in highly competitive professional sports or enjoying innumerable rounds of golf with his friends, he was a born natural at all. Prior to his NFL career he served his country in the United States Marine Corps, serving with distinction in the Korean War. On June 28, 1952, he married his high school sweetheart, the former Phyllis “Candy” Hannot and they enjoyed over 46 years of marriage together until she preceded him in death on October 26, 1997. After he retired from football, he worked for many years in the Automotive Industry. He also loved planting and growing tomatoes (but not as much as eating them!). He always looked forward to big sporting events on TV, and loved playing music for hours on end. Dick thoroughly enjoyed life and the time he spent with his family and friends. He was a lovable person who could light up a room! He will be dearly remembered and missed. Dick is survived by his “gal” Annette Fuller, his 4 children Jerry Deschaine, Kim (Joe) Collette, Lynn Deschaine and special friend Bill, Vicki (Greg) Boulanger, 8 grandchildren Danielle, Brittania, Krystle, Dustin, Nicholas, Christopher, Jesse and Brianna. He is further survived by nieces, nephews other relatives and friends. He was preceded in death by one sister and brother-in-law Vivian and Steve Harrington, two brothers and two sisters-in-law Wally and Glady Deschaine, Norm and Mary Deschaine. Gathering of family and friends will be held from 1:00 P.M. to 3:00 P.M. on Thursday, May 31, 2018 at St. Bernard Catholic Church 2040 Hillside Lane. A Mass of Christian Burial will be held at 3:00 P.M. with Rev. Mark VanderSteeg officiating, followed by a Life Celebration at his favorite supper club, Wally’s Spot. In lieu of flowers or other expressions of sympathy, a Memorial Fund has been established for the Menominee High School Athletic Hall of Fame. The family would like to offer a warm note of appreciation to the Doctors and Nurses of the 4th floor at Aurora Baycare Hospital for all of their loving care and compassion shown to Dick~ your kindness will never be forgotten.

The family of Mr. Richard "Dick" R. Deschaine created this Life Tributes page to make it easy to share your memories.

Send flowers to the Deschaine family.