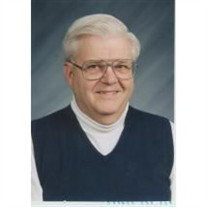 Richard M. Davies – March 1, 1924 – November 30, 2008 Dick was born February 29 at midnight, so his parents, Nelson & Helen Davies, opted to give their first born a birthday every year. Dick graduated from West High School, attended Lawrence College Conservatory of Music, and served in the US Army Counter-Intelligence Corp. He worked as a dental technician for 37 years. In retirement he worked at Green Bay Christian School. Dick married Delores Fayas on October 6, 1951 & together they raised their 4 children: Gregory, Dr Jill Davies-Kern (Nate Kern), both of Green Bay, Anne, the Middle East, & Eve (Scott) Pfitzinger, Indianapolis. They were blessed with 5 grandsons, Keanen (fiancé Ellen Terrien) & Evan Kern, Alaric, Blaise & Camber Pfitzinger. He is also survived by a sister, JoAnn Felton, a brother-in-law, Merlin Peterson, & nieces & nephews. He was preceded in death by his parents, his in-laws, Henry & Laura Fayas, a granddaughter, Chandra Pfitzinger, sister Ellen Peterson & brother-in-law Chester Felton. Dick was a musician (trombone & trumpet) & played with the Packer Lumberjack Band. He played & wrote arrangements for most of the area big bands in the 40’s & 50’s. He also enjoyed his sail boat. Dick loved the Lord Jesus Christ. He was a long time songleader and Elder at Country Bible Church. It was his practice for 25 years to read the Bible through in a year, reading several chapters a day. Visitation will be on Tuesday, (Today) Dec 2, from 4 to 8:00 p.m. at Bethel Baptist Church, 1601 Libal Street, Green Bay. A Memorial Service will be held on Wednesday, at 11:00 a.m., with visitation before from 10 – 11, also at the church. Online condolences may be expressed at www.hansenfuneralservice.com In lieu of flowers, donations may be made to Upper Peninsula Bible Camp. The family wants to thank Asera Care Hospice for their incredible care & helpfulness!!

The family of Richard M. Davies created this Life Tributes page to make it easy to share your memories.

Send flowers to the Davies family.