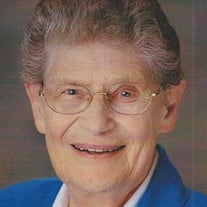 Sister Regina (Bernice Mary) Le Mere, St. Francis Convent, Green Bay, WI., died on Thursday, January 18, 2018. She was born on May 28, 1927, to Louis and Regina (Vervaeren) Le Mere, in the town of Howard, WI. She attended St. John the Baptist Grade School. Sister Regina was born into a musical family. Her father played the violin as well as her older brother, Leo, and herself. Her mother played the harmonica. Many pleasant evenings were spent on the porch of the Homestead farm house. Her two older brothers were a challenge for her to keep up with but eight years later the family was blessed with another boy and a girl. Sister entered St. Francis Convent in September of 1942, and was received into the Congregation in August of 1943, where she continued her studies. Sister Regina served her Sisters at McCormick Home for the Elderly as Baker, Supervisor of food service, housekeeping, and maintenance, Activity Director and Organist. She later served as Administrator and Assistant Administrator of the McCormick Home. Sister also served at Holy Name Retreat Center on Chambers Island and as a housekeeper for the Sisters at St. John the Baptist Parish in Howard. Sister worked for Home Instead Senior Care and volunteered for Heartland Hospice. Her kindness to the elderly and handicapped was greatly appreciated. Sister enjoyed making many new rosaries and repairing broken ones. It was important for her to keep up with the news of the day and the world as well as getting together with family and the Sisters. She enjoyed keeping up with the Packers and the Brewers. Survivors include the Sisters of St. Francis of the Holy Cross and Associates; her sister, Catherine Bonno, Green Bay, WI., nieces, nephews and other relatives and friends. Sister was preceded in death by her parents, Louis and Regina Le Mere, brothers Leo and his wife Laverne Le Mere, Norman Le Mere, Louis and his wife Eulogia Le Mere, and brothers-in-law Kenneth Blahnik and Ben Bonno. Friends may call at St. Francis Convent, 3110 Nicolet Drive, Green Bay on Monday, January 22 at 4:00 p.m. for the reception of the body and visitation. The Rosary will be prayed at 6:00 p.m. The Vigil Service will be at 7:00 p.m. Visitation for Sister Regina will continue on Tuesday, January 23 at Holy Cross Church, 3009 Bay Settlement Road, from 9:30 a.m. until the Funeral Mass at 10:30 a.m. with Reverend Dean Dombroski as celebrant. Burial will be in the St. Francis Convent Cemetery. The Sisters of St. Francis and the family of Sister Regina wish to express their gratitude to the nursing staff at St. Francis Convent and at Woodside Lutheran Home for their loving care and support.

The family of Sister Regina Le Mere created this Life Tributes page to make it easy to share your memories.