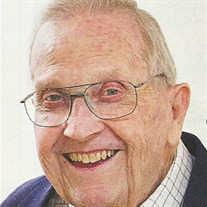 Raymond Paul Zimmerman, Jr, 81, Green Bay was welcomed into Heaven when he heard God call his name and say “Well done my good and faithful Servant, its time to come home.” Paul was born on December 14, 1934 in Eau Claire the son of the now late Raymond and Frances (Luebkeman) Zimmerman. He was a graduate of West High School with the class of 1953. He was a talented athlete, which gave him the opportunity to attend Northwestern University on an Athletic (Football) Scholarship. Paul was a member of the Mens N Club and of the Phi Delta Theta Fraternity. He graduated in 1958 with a B.S. Degree in Education and obtained his Masters Degree from Northern Michigan University in Marquette. On August 12, 1961 he married his soul mate the former Gloria Swaer in Oconto. Paul taught school in Brodhead, Oconto Falls and Green Bay for 37 years and spent most of his career teaching Geography to junior/middle school students. The last 29 were spent at Edison Middle School. After his retirement he was a Tour Escort for Lamers and greatly enjoyed working there to ensure the passengers were safe and had fun. Paul loved the outdoors, in particular Langlade County, and was an avid hunter and fisherman. His other interests included bowling and golfing (especially with the Buchanan bunch) sailing, x-country skiing, playing cards, reading a good book and building his model train display. Because of who he was, he made the perfect Santa and would scoot about on his 4 wheeler handing out candy. He was also instrumental in helping develop the Display of Luminaries in Indian Trails during Christmas time. He and Gloria loved to travel. They visited all 50 states and took a number of cruises with Alaska being Paul’s favorite. Some of their other trips included leading a group of educators to China in 1982, the Soviet Union in 1985, Europe, South Africa and Morocco. He is survived by the love of his life Gloria, one sister-in-law Kathleen Pagel (Harold Jacobs), his Luebkeman Clan and nieces and nephews. He is further survived by his hunting buddies Jim Reynolds, Al and Aaron Manders, and Ted Hawk. And dear friends Scott Russell, Rodolfo Alonso and John Denkert. Everyone who knew Paul will miss his quick wit and great sense of humor. In accordance with Paul’s wishes there will be a brief gathering from 9:00 A.M. to 10:00 A.M. on Friday, October 21, 2016 at Peace Lutheran Church 1954 County Road U, Green Bay. A Funeral Service will be held at 10:00 A.M. with Pastor Don Behrendt officiating. Immediately following the church service a Celebration of Paul’s life will continue at the Radisson Hotel & Conference Center, 2040 Airport Drive, Green Bay from 11:00 A.M. until 2:00 P.M. In Lieu of flowers memorials can be made to Northwestern University, Mens N Club, the Brian LaViolette Foundation (for the South Africa Scholarship or the Ray Zimmerman West High Scholarship), or Peace Lutheran Church. Gloria would like to offer a special note of appreciation to all of the caregivers, nurses and doctors who have been there for Paul through the years, especially Dr. Raymond Bachhuber and Dr. John Andrews. And to the staff at Woodside Lutheran Home Rehab Unit and Unity Hospice: Your kindness will never be forgotten. God Bless you all.

Raymond Paul Zimmerman, Jr, 81, Green Bay was welcomed into Heaven when he heard God call his name and say &#8220;Well done my good and faithful Servant, its time to come home.&#8221; Paul was born on December 14, 1934 in Eau Claire the son... View Obituary & Service Information

The family of Mr. Raymond Paul Zimmerman Jr. created this Life Tributes page to make it easy to share your memories.

Send flowers to the Zimmerman family.