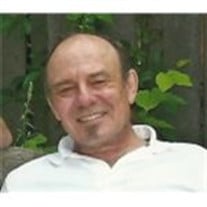 Randy C. Delvaux, Sr. passed away unexpectedly on Friday, September 13, 2013. He was born on August 21, 1950 to Adrian and Audrey (Phillips) Delvaux, in Oconto, WI. He attended the Green Bay Public School system and earned an associate degree from Northeast Technical College. He enlisted in the U.S. Navy in 1972 and served in the Vietnam War for which he received a Bronze Star and Vietnam Service Medal. Randy was proud of being a Vietnam Veteran and participated in many events supporting the veterans. Randy had a passion for driving semi and drove OTR for many years. He enjoyed going out to eat at Julie’s Café and weekly breakfast with his brothers Dick and Ralph. He liked collecting antiques and coins, WWF Wresting, fishing, playing cards and watching the Green Bay Packer Games. He also was an avid Harley Davidson rider and took part in rides for charity. Randy was an excellent auto mechanic and helped a lot of people with his talent. Randy was a Christian man who was very proud of his children and grandchildren and wanted the best for them. He truly enjoyed and loved the times they spent together. Randy will be sadly missed by his children Joy Strader, Traci (Sean) Flippin, Randy Delvaux, Jr., Robert Delvaux, Sarah (Josh) DeGroot, grandchildren Cassandra Kinas, Michaela Flippin, Alexandra Flippin, Lennon Delvaux-Koehne, great-grandchild Danny Rockbury. His brothers and sisters Mary Belonger, Lea (Richard) Rabas, Bonnie (Keith) Brunette, Garth (Shirley) Delvaux, Ralph (Faye) Delvaux, Gary (Ruth) Delvaux and Richard (Marlene) Delvaux, many nieces, nephews and cousins. His best friend LT. He was preceded in death by his parents, a sister, Patsy Delvaux; his brother and sister-in-law Sam (Adrian) and Faye Delvaux. Gathering of family and friends will be held from 9:30 A.M. to 11:00 A.M. on Friday, September 20, 2013 at St. Bernard’s Catholic Church 2040 Hillside Lane. A Mass of Christian Burial will be held at 12:00 P.M. with Rev. Mark Vander Steeg officiating. Burial at Nicolet Memorial Gardens where a Military Funeral Honor Rite will be performed in honor and recognition of his service to his country. In lieu of flowers a memorial fund has been established. Until we meet again, may you be at peace in heaven.

The family of Randy Delvaux, Sr. created this Life Tributes page to make it easy to share your memories.

Send flowers to the Sr. family.