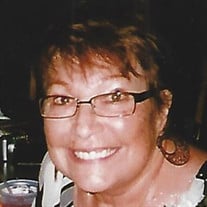 On Feb. 11, 2021, surrounded by her loving family, our dearest Phyllis Mae Swim was called home. Born a strong Bohemian woman on May 24, 1934, in Lena, WI, she was the eldest daughter of Elhart and Bessie Teteak. She graduated from Lena High School in 1952, where she cheered on the Lena Wildcats as captain of the squad. It was there she met her husband of 49 years, Darrell L. Swim. Soon after, they moved to Green Bay where they raised their three beautiful daughters—who were the absolute light of their lives. Phyllis first worked at the Wisconsin Telephone Company and then became an accomplished Avon representative for 27 years, achieving many high honors, such as the President’s Club Award. However, her greatest work was raising her family and teaching them valuable life lessons they’ll hold near and dear to their hearts from now on. The most important one being: “Family over everything.” “Social butterfly” is truly the best way to describe her outgoing nature. She spent 20+ years competing in various bowling leagues—a passion of hers. She also enjoyed her get-togethers with her treasured Lena Club friends, as well as the neighborhood coffee gatherings. She always welcomed time spent with family and friends; and, as many would say, “to know her is to love her.” Phyllis became an avid fan of Wisconsin sports. She spent many Sundays cheering on the Packers (very loudly) in her very own living room arena. But her favorite seat in sports—when she was able—was in the bleachers cheering on her beloved grandchildren. Besides caring for her own children, grandchildren and great-grandchildren, she took on that role for her late sister Audrey’s three children as well—Tom, Todd, Jayme and families. She also held a special place in her heart for her sons-in-law, Bill, Eric and Tom; they were truly the sons she never had. Phyllis was the heartbeat of her family. She is survived by her daughters: Julie (Tom Jubert), Amy (Bill Hoffmann), Michele (Eric Johnson); and grandchildren: Jen (Aaron), Lindsey (Aaron), Jacob (Paige), Logan, Gabrielle (Cam), Alexis (Brandon) and Cullen. Additionally, she is survived by her great-grandchildren: Emily, Brady, Ryan, Murphy, Zoey, Corbyn and Porter; her brother-in-law/friend: James Bowman; sisters-in-law/friend: Carol Swim and Orianne Swim; and many nieces, nephews, other relatives and long-time friends. She was preceded in death by her husband, Darrell; her parents, Elhart and Bessie Teteak; her sister, Audrey; her niece, Ann Marie; her mother- and father-in-law, Edna and Leslie Swim; and her brothers-in law, Gene and Leroy Swim. “Keep your mind and heart open. I may show up when you least expect me to.” Upon her families wishes due COVID-19 a private family service will be held. Entombment at Fort Howard Mausoleum. A celebration of her life will be planned for a later date. The family would like to offer a special thank you to Unity Hospice for their care. Also, a warm note of appreciation to Dr. V Gala for her loving care and concern.

On Feb. 11, 2021, surrounded by her loving family, our dearest Phyllis Mae Swim was called home. Born a strong Bohemian woman on May 24, 1934, in Lena, WI, she was the eldest daughter of Elhart and Bessie Teteak. She graduated from Lena High... View Obituary & Service Information

The family of Mrs. Phyllis Mae Swim created this Life Tributes page to make it easy to share your memories.

Send flowers to the Swim family.