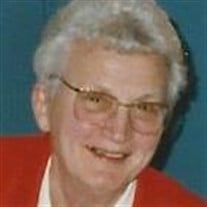 Phyllis M. (Vercauteren) Klarkowski, 87, Green Bay, passed away on Friday, July 14, 2017 at Woodside Lutheran Home after a long battle with Alzheimer&#8217;s disease. Phyllis was born on April 20, 1930 in Green Bay, the daughter of the now... View Obituary & Service Information

The family of Mrs. Phyllis M. Klarkowski created this Life Tributes page to make it easy to share your memories.

Send flowers to the Klarkowski family.