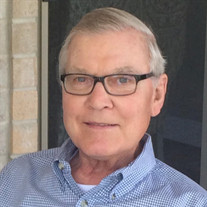 Philip J. Loritz, 80, Hobart, found eternal peace on Friday, April 5, 2019 after a faith-filled life on earth. Phil was surrounded by his wife and family and was welcomed into Heaven by his son, Dave. Phil was born in Green Bay on January 29, 1939, to the late Peter and Agnes (DeBroux) Loritz. In 1957, he graduated from Premontre and immediately began his banking career, starting as a teller at the former Peoples Trust and Savings Bank in Green Bay, progressing into leadership roles at various locations around the state, and ultimately retiring as President from Chase Bank in Oshkosh/Fond du Lac. While working and raising a family, Phil attended the Badger Business College, the American Institute of Banking (AIB), and the Chicago Bank Administration Institute. This professional dedication combined with his natural ability to connect with and welcome customers helped Phil fulfill 44 successful years in banking. On September 10, 1960, Phil married the former Donna Froelich at St. Bernard Catholic Church in Green Bay. Together, they raised three children and enjoyed being with the family they created, especially at their cottage. He was an avid Packer fan, but as a man with a servant’s heart, his true joy came from giving of his time and talents to serve others and the Lord. Phil loved and cherished his family and is survived by his devoted wife, Donna; his children, Dave (who joined the Lord on April 19, 2018) (Lisa) Loritz, Steve (Mary) Loritz, and Cheryl (Dan) Rieth; 6 grandchildren, Charlie (Kari), Jodi (deceased), Katie (Jake), Emily, Ryan and Abby; 2 great-grandchildren, Madelyn and Ivy; 2 brothers, Cliff (Pat) Loritz and Tim Loritz; and many brothers- and sisters-in-law who loved him like a brother. He is further survived by numerous nieces, nephews, and friends. He was preceded in death by his stepmother, Catherine Loritz; 2 brothers, Ralph and Cyril; a sister-in-law Ceil; his mother-in-law and father-in-law Joe (Ruth) Froelich; a brother-in-law, Pat Froelich; and a sister-in-law, Judith Froelich. A gathering of family and friends will be held from 1:00 P.M. to 3:45 P.M. on Thursday, April 11, 2019 at St. Elizabeth Ann Seton Parish, 2771 Oakwood Drive followed by a Mass of Christian Burial at 4:00 P.M. with Father Paul Demuth celebrating, assisted by Sr. Marla Clercx, Pastoral Leader. Phil’s family would like to offer a warm note of appreciation to the many wonderful caregivers whose knowledge and sincere compassion aided Phil over the years - you are too numerous to mention by name, but your care and comfort will be lovingly remembered. We love and will miss this wonderful man but know that “a future awaits those who seek peace” (Psalm 37:37).

Philip J. Loritz, 80, Hobart, found eternal peace on Friday, April 5, 2019 after a faith-filled life on earth. Phil was surrounded by his wife and family and was welcomed into Heaven by his son, Dave. Phil was born in Green Bay on January... View Obituary & Service Information

The family of Mr. Philip J. Loritz created this Life Tributes page to make it easy to share your memories.

Send flowers to the Loritz family.