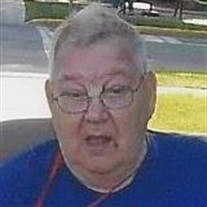 Peter E. Spatz, 87, De Pere, passed away on Wednesday, April 20, 2016 at AuroraBay Care Medical Center. Peter was born on September 28, 1928 in Auburndale, WI the son of the now late William and Elizabeth (Seidel) Spatz. On July 1, 1950 he married the former Bernadine Kiehl at St. John’s Lutheran Church in Auburndale and their marriage was blessed with 4 daughters. Bernadine preceded him in death on May 29, 1997. Together Peter and Bernadine owned and operated Pete’s Shoe Store in Reedsburg, WI. In his later years he worked at the Haunted Mansion in Wisconsin Dells. Peter is survived by two daughters: Sally Reckelberg, Carol Spatz, 1 brother-in-law Thomas Crum Sr., 7 grandchildren Thomas Jr., Terri, Tonya, Timothy, Gerald, Cathy and Diane, 3 great-grandchildren, 1 brother and 1 sister. He is further survived by nieces, nephews other relatives and friends. He is preceded in death by 2 daughters and 3 sons-in-law: Sandra, Cheryl (Joe), Gerald Sr. and Gordon. Gathering of family and friends will be held on Saturday, April 30, 2016 from 9:00 A.M. until the time of Service at Trinity Lutheran Church 728 Church Street. A Memorial Service will be held at 11:00 A.M. with Rev. Matthew Gehrke officiating. Burial at Newport Cemetery.

The family of Mr. Peter Spatz created this Life Tributes page to make it easy to share your memories.

Send flowers to the Spatz family.