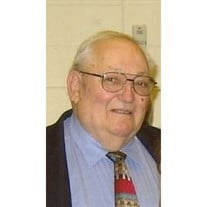 Paul J. Nistler, 79 Green Bay passed away on Wednesday, April 14, 2010 at the University of Wisconsin Madison Hospital. Paul was born on November 11, 1930 in Ixonia, Wisconsin the son of the late Joseph and Gladyce (Heiden) Nistler. Paul served his country in the United States Navy until his honorable discharge in 1953. He met the love of his life Helen Imming and the two were joined in marriage on April 19, 1952. Paul was employed for many years at the former Cities Service Oil Company first as a salesman and then District Manager for the Green Bay Area. He worked part-time at Denil-Wall Auto Dealership and established many new friendships along the way. Paul’s faith was extremely important to him and was very active at St. Bernard Parish, serving in several capacities and was most proud of serving on the inaugural Parish Council and with the Holy Name Society. He belonged to the American Legion Sullen Wallen Post #11, the Knights of Columbus and was part of the Barber Shoppers for several years. In his free time, he enjoyed playing Bridge, golfing and gardening. The most important thing in Paul’s life was his family and he cherished being a husband, father and grandfather. Paul is survived by his loving wife Helen, his five children Paul (Audrey) Nistler, Brillion; Bob (Carol) Nistler, Woodbury, MN; Kathy (Doug) Hartman, Green Bay; Karen (Dan) Lange, Woodbury, MN; Jamie (Tim) Hornberger, Green Bay; 14 grandchildren, 3 great-grandchildren; two sisters and 3 brothers-in-law and 1 sister-in-law. He is further survived by nieces, nephews, other relatives and friends. Gathering of family and friends will be held on Saturday, April 17, 2010 from 12:00 P.M. to 2:30 P.M. at St. Bernard Catholic Church 2040 Hillside Lane. Mass of Christian Burial 2:30 P.M. at the church with Rev. David Pleier officiating. A Military Honors Salute will be held immediately following the mass to acknowledge his faithful and honorable service for his dedication to our Nation. Burial will take place at the Central Wisconsin Veterans Memorial Cemetery in King, Wisconsin.

The family of Paul Nistler created this Life Tributes page to make it easy to share your memories.

Send flowers to the Nistler family.