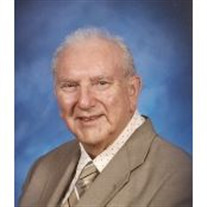 Green Bay – Paul Mohr Giesler was called into the immediate presence of his Lord and Savior on Tuesday July 12, 2011. Paul was born in Green Bay on 1-1-21 to Carl and Laura (Dickey) Giesler. He was one of seven children. In high school Paul worked at a family grocery store. He served on the Brown County Christian Youth Association while attending East High School. This role lead him into serving on several East Moravian leadership roles in his church. He was a President of the Brown County Council of Churches and served as chairman of the annual Festival of Faith which brought over 7000 worshippers to the Arena for a Reformation Sunday evening service. He was frequently a substitute lay pastor in several Moravian churches in the Green Bay area and also in Winston-Salem, NC. Paul married Ruth (Dymond) in 1942 and together raised four children. After her death, he married Genevieve (VanLanen) Huetter, who had three children by her previous marriage. Paul enlisted in the U.S. Navy in 1942 as a seaman. He was advanced to Aviation Chief Radioman having 400 radiomen under his supervision while serving at Norfolk, VA. He was assigned to the aircraft carrier USS San Jacinto, while serving in the Philippines and Japan during World War II. Paul enjoyed telling his many war stories to his children and was asked to tell those stories to a local historical group gathering stories that will be published for the State Historical Society. Paul was employed by Charmin Paper Products (Proctor and Gamble) for thirty six years. He began as a laboratory technician and worked as an Automatic Controls Engineer until retirement. He enjoyed playing the role of Santa Claus for the company’s annual Christmas party for 25 years. He was a member of the Instrument Society of America (ISA), and served on several committees related to his vocation. Paul and Gen moved to NC and were very involved in the Moravian Home Church. He volunteered as a docent for the historical church tours and also served as Assistant Director of Sunnyside Ministry for the church. Paul enjoyed playing card games with his children, other relatives and friends and worked crossword puzzles for years. He and his wife, Gen, enjoyed entertaining their grandchildren at their home in NC when the grandchild turned 12 years old. Paul is survived by three daughters, Mary Tipton-Cohen (Lloyd), Janet Erickson (Richard), Carol Berggren (John), daughter in-law, Connie Stoychoff, step children, Bernard Huetter (Diane), Tom Huetter(Betty), and Sue Robinson(Jim). Grandchildren, Sara (Russ) Engstler, Heidi (Luke) Strand, Laura (Mike)Schabow , Teri (Josh) VanLieshout, the Huetter grandchildren Jennifer (Craig) Billings, Rebecca (Greg) Klein, James (Jennifer) Huetter, David (Amy) Huetter, Sarah (Jeremy) Tourville, Donna (Rob) Hancock, Maggie Robinson and 15 great grand children. Paul is also survived by brother, Rev. John Giesler (Barbara), NC and sisters, Ann LaFortune (Rev. Joseph), ND and Grace Dittmer, WA.and many nieces and nephews. He was preceded in death by his wives, Ruth Dymond Giesler, Genevieve Huetter Giesler, his son Daniel Giesler, brother, Carl Giesler, sisters, Ruth Nekelwitz and Jane Noth. A memorial service will be held at the Woodside Lutheran Home Chapel at 1040 Pilgrim Way, Green Bay at1:00 p.m. on Friday July 15, 2011. In Lieu of flowers a memorial fund has been established for the Salvation Army. The family extends special appreciation to LuAnn and Alexis of Woodside, Heartland Home Hospice Care and the rest of the caring givers of both facilities.

Green Bay &#8211; Paul Mohr Giesler was called into the immediate presence of his Lord and Savior on Tuesday July 12, 2011. Paul was born in Green Bay on 1-1-21 to Carl and Laura (Dickey) Giesler. He was one of seven children. In high school... View Obituary & Service Information

The family of Paul M. Giesler created this Life Tributes page to make it easy to share your memories.

Send flowers to the Giesler family.