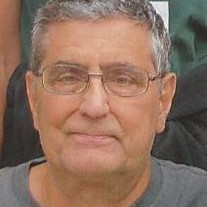 Patrick J. Sigmund, 69, Green Bay, was welcomed into Heaven surrounded by his loving family on Thursday, April 13, 2017. After a courageous battle with bladder cancer, the Lord said, "Welcome home, my good and faithful servant!" Pat was born on August 12, 1947, in Green Bay, the son of the now late Milton and Eloise (Schoen) Sigmund. He served his country in the United States Army as part of the Long Range Reconnaissance Patrol during the Vietnam War. He was honorably discharged in 1973. Pat was recently accepted for an Honor Flight to Washington D.C., but was called by the Lord for his Honor Flight to the Church Triumphant in Heaven, which he accepted most graciously and thankfully. On November 14, 1970, he married the former Lucille Guns at St. Mary's Church in Glenmore. After serving his country, Pat returned home to continue to serve his community in the grocery business through his work at Sure Way and Jubilee Foods. He started working as a bag boy, but through hard work and dedication, he eventually became an owner. He instilled great work ethics in his children and in those who worked with him and for him. Pat was also famous for his chicken booyah recipe that was passed down from his uncle, Sam, and was enjoyed at St. Mary of the Angels Church picnics, as well as family gatherings and other community events. Pat's Heaven on Earth was "Up North" in Amberg, where he enjoyed nothing more than spending time with family in God’s Country, fishing, relaxing and simply making memories that will always be cherished. Pat was a gift to his grandchildren, always supporting their many adventures and activities. He was a loving husband, father, grandfather, brother, and friend to many, and will always be lovingly remembered and sorrowfully missed as he always made those around him feel special. Pat is survived by his wife, Lucy, one daughter and son-in-law, Jennifer and Todd Hendricks, three sons and three daughters-in-law, Paul and Heidi Sigmund, Brad and Julie Sigmund, Greg and RaeAnn Sigmund; nine grandchildren, Brady, Chase, Aidan, Logan, Noah, Ava, Emma, Grace, and Alexis; two brothers and three sisters-in-law, Al (Judy) Sigmund, Steve (Stacy) Sigmund, Janet Sigmund; a niece, Michelle (Todd), and nephews, Steve (Andrea), Scott (Melissa) and Matt; his mother-in-law, Arleen Guns, and by Lucy's brothers and sisters and their families. He is further survived by his godchildren, Michelle, Jim, and Matt. He was greeted in Heaven by his son, Nicholas, his parents, one brother, Mike, his father-in-law, Ray, two brothers-in-law, Jeff and Dave, and one sister-in-law, Debbie. Gathering of Family and Friends will be held on Tuesday, April 18, 2017, from 4:00 to 8:00 P.M. at Saint Matthew Catholic Church, 130 St. Matthew Street. A Parish Wake Service will be held at 7:00 P.M. Visitation will continue after 9:30 A.M. on Wednesday, April 19, 2017, at the church. A Mass of Christian Burial will be held at 11:00 A.M. with Rev. Bob Kabat officiating. Immediately following, Military Funeral Rites will be held in recognition of Pat's dedication to his country. Entombment at Shrine of the Good Shepherd Chapel Mausoleum. In lieu of flowers, Memorial Donations may be made to Cover Me Veterans, Juvenile Diabetes Research Foundation (JDRF), or The Wisconsin Urological Research Institute Fund. The family would like to offer a warm note of appreciation to Judy and Ruth with VA Oncology. They would also like to acknowledge Unity Hospice for all of their wonderful care and compassion, especially Amy and Jane. "Papa fought the Good Fight!”

The family of Mr. Patrick "Pat" J. Sigmund created this Life Tributes page to make it easy to share your memories.

Send flowers to the Sigmund family.