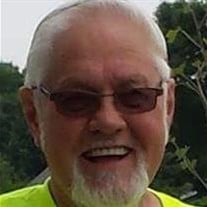 Patrick James Daul, 69, Green Bay, was welcomed into Heaven early Thursday morning, March 9, 2017. After struggling through numerous health-related battles, his courageous fight has ended. He was born and raised in Kewaunee, the son of Arthur and Helen (Hafeman) Daul. In the good old days, hanging out at the Swamp Bar and Birchwood in Kewaunee, led Patrick to his true soul mate and in 1966 Patrick married Elaine Berger in Casco and they recently celebrated 50 years of marriage. He was a devoted husband, father, and grandfather. Patrick started his working career at a young age working at local fish markets. He then began working in Sturgeon Bay at Bay Ship Building and Peterson Builders, then retiring from TEAM Industries due to his first battle with cancer. He was an avid sports fan following the Packers and the Badgers. Patrick had an impact on everyone he met. His sense of humor, quick-wit, one-liners, smiles, and a big heart made him unforgettable. He could talk to anyone and would have you laughing in minutes. He often tried to indicate that he carried a big stick, but actually had a marshmallow heart. Our lives will never be the same without him. Patrick is survived by his wife, Elaine, two children, Penny (Joe) Dier, Scot (Nicole) Daul and three grandchildren, Bethanie (Erik) Dier, Taylor Daul, and Dylan Daul, also his sister Arlene Rohr, sister in-law Arlene Daul, and mother-in-law, Agnes Berger, along with numerous nieces and nephews who are special to him. He was preceded in death by his parents, sisters, Betty (Joe) DeNamur and Alice (Walter) Zimmerman, brothers, Myron Daul and Norbert (Jeannie) Daul, and his father-in-law, Lawrence Berger. In accordance with Patrick’s wishes, there will be no visitation or services. To send online condolences for the family, please go to www.HansenFuneralService.com. In lieu of flowers, a memorial fund in Patrick’s name is being established. A memory is one gift from God that death cannot destroy. We love you and will miss you greatly as you walk Beyond the Sunset forever more, until we meet again.

Patrick James Daul, 69, Green Bay, was welcomed into Heaven early Thursday morning, March 9, 2017. After struggling through numerous health-related battles, his courageous fight has ended. He was born and raised in Kewaunee, the son of Arthur... View Obituary & Service Information

The family of Mr. Patrick J. Daul created this Life Tributes page to make it easy to share your memories.

Send flowers to the Daul family.