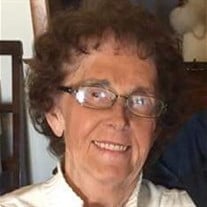 Norma F. LeSage, Green Bay passed away on Saturday, February 25, 2017 at Birch Creek Assisted Living. Norma was born on February 27, 1932 in Menominee, MI the daughter of the now late George and Gertrude (Sandberg) Casebeer and resided in Stephenson, MI for her childhood. On June 11, 1955 she married Donald LeSage at Saint Francis Xavier Cathedral and the couple enjoyed over 27 years together. Donald preceded her in death on September 2, 1982. Norma had many interests in life but among her favorites were knitting, crocheting, playing cards and figuring out jigsaw puzzles. She was quite the social bug and loved spending time with her friends and truly treasured the many friendships she formed including her special friend Robert “Bob” Reis whom she found joy again with. Norma and Bob spent a great deal of time at their cottage in Door County. And lastly we would be remiss not to add that Norma loved to shop, so when she wasn’t at home or with her friends she could be found in the stores. Norma is survived by 3 sons and daughters-in-law Steve & Debbie LeSage, Mark & Sue LeSage, Todd & Cheryl LeSage, 5 grandchildren Chris and her special friend Em, Jason, Dani (Kenny), Nick, Samantha, 3 great-grandchildren Joey, Khallie and Riley, 3 sisters-in-law and 1 brother-in-law Nona Casebeer, Marilyn (Ron) Frosch, Darlene VanDonsel. She is further survived by many nieces, nephews other relatives and friends. She was preceded in death by her husband Donald, her special friend Bob, 1 brother James Casebeer, 2 brothers-in-law Gerald LeSage and Dale VanDonsel. Gathering of family and friends will be held from 4:00 P.M. to 8:00 P.M. on Thursday, March 2, 2017 at Resurrection Catholic Church 333 Hilltop Drive. A Parish Wake Service will be held at 7:00 P.M. Visitation will continue on Friday, March 3, 2017 from 10:00 A.M. to 11:00 A.M. at the church. A Mass of Christian Burial will be held at 11:00 A.M. with Bishop Robert Morneau officiating. Entombment at Allouez Chapel Mausoleum. In lieu of other expressions of sympathy a Memorial Fund has been established in her name. The family would like to extend a warm note of appreciation to the Birch Creek “family” for all of the love, devotion and care shown to Norma~ your kindness will never be forgotten. Also, a special thank-you to Heartland Hospice for taking such great care of her.

The family of Mrs. Norma F. LeSage created this Life Tributes page to make it easy to share your memories.

Send flowers to the LeSage family.