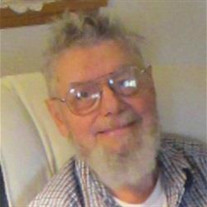 Norbert J. Drewieske, 74, passed away on, Thursday, October 3, 2019 at Bellin Hospital. Norbert was born on May 13, 1945, the son of the now late Norbert & Pat (Anderson) Drewieske. He was a graduate of Green Bay East High School with the class of 1963 and was drafted into the U.S. Army and served his Country. Norb was honorably discharged in 1971. On December 29, 1965, he married the former Theresa A. Kaminski at SS Cyril & Methodius and the couple enjoyed over 44 years together. Theresa preceded him in death on June 6, 2009. He retired from James River Paper Mill after 44 years. Norbert had quite the collection of toy tractors and trains. He loved his John Deere, listening to Polka Music and going to the Casino. Norbert is survived by a son: Anthony Drewieske, his four daughters: Catherine Drewieske, Vicky (Michael) Collin, Wanetta (Randall) Warpinski, Diana (James) Pahl, grandchildren: Hunter, Derek, Spencer, Jacqueline, Kyleen, Tyrel, Logan, Mackenzie, Isabella and Owen, his brothers and sisters: Janice, Alan (Janet); LeRoy (Mary); Stanley and Melton Drewieske, Theresa Engebos. He is further survived by his sisters and brothers-in-law, nieces, nephews other relatives and friends. He was preceded in death by one brother: Leonard, a sister and 2 brothers-in-law Judy (Jerry) Braun, Cletus Engebos Gathering of family and friends will be held from 9:00 A.M. to 11:00 A.M. on Tuesday, October 8, 2019 at Prince of Peace Catholic Community, 3425 Willow Road, Bellevue. A Funeral Service will be held at 11:00 A.M. Burial at Pine Grove Cemetery. The family would like to offer a special thank you to the staffs of Unity Hospice along with the staff of Bellin Hospital for all of their loving care and concern. Also, a warm note of appreciation to the Courtyard Assisted Living Staff for all they did to make Dad comfortable and the wonderful care they provided.

Norbert J. Drewieske, 74, passed away on, Thursday, October 3, 2019 at Bellin Hospital. Norbert was born on May 13, 1945, the son of the now late Norbert & Pat (Anderson) Drewieske. He was a graduate of Green Bay East High School with the... View Obituary & Service Information

The family of Norbert J. Drewieske created this Life Tributes page to make it easy to share your memories.

Send flowers to the Drewieske family.