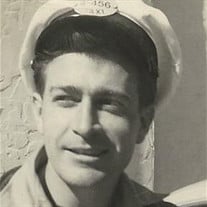 Neville “Bud” E. Lade, 99, Green Bay passed away on Friday, July 29, 2016. Neville was born on July 19, 1917 in Alexandria, MN the son of the now late Edward and Inez (Morgan) Lade. Neville attended Green Bay East High School and after graduation he enlisted in The U.S. Army Air Corp to serve his country. He served as an ambulance driver at Hamilton Field in San Rafael, CA, until his honorable discharge. On September 6, 1940 he married the former Bernice “Bunny” Johnson and the couple enjoyed over 52 years together. Bernice preceded him in death on January 19, 1993. Bud worked for all of his life as a truck driver for local companies. He was very artistic on all mediums and had a creative talent that he was very proud of as well as being very accomplished with the harmonica. Bud was a hard working and faithful servant who always gave of his time and talents to others. He was a loving husband, father, grandfather and a friend to many and will always be lovingly remembered and sorrowfully missed. Bud is survived by his children Tim Lade, Susan Lade and Scott (Lynn) Lade, his grandchildren Dennis (Christine) Schumacher, Jessica Lade, Katie (Keith) Lade, Abigale Lade (Roger Clem), Jim (Gayle) Begotka, Suzanne (Thomas) Terrien, Kristin (James) Pekoll, great-grandchildren Michael, Grace, Sara, Marie, Nicole, Felicia, Annie, Joey and Huxley, great-great-grandchildren Emberlie, Dezmere, Daytahnee and Theodore, a sister-in-law Marcine, his step-grandchildren Vicki and Kory. He is further survived by numerous nieces, nephews other relatives, and many special friends including Pat, Julie, Jeanne, Joanne, Billie Jo, Debbie and his good friend Don at Borneman’s. He was preceded in death by a daughter Mary Francis, a great-granddaughter Monica, a great-grandson David, a step grandson Brian, a sister Geraldine (Burl) Boone, two brothers Earl and Gordon Lade. In honor of Bud’s wishes private services will be held. Burial will be next to Bernice. The family would like to offer a special note of appreciation to the staffs of Borneman Nursing Home for all of their loving care, compassion and concern~ your kindness will never be forgotten.

The family of Mr. Neville E. Lade created this Life Tributes page to make it easy to share your memories.

Send flowers to the Lade family.