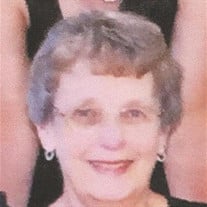 Nancy R. (Seidl) Conard, 81, Green Bay, slipped away peacefully on April 24, 2016. She was born in Luxemburg, Wisconsin, on July 27, 1934, to Richard and Elvira (Miller) Seidl. Nancy graduated as the class salutatorian from Luxemburg High School in 1952 and then worked at the Bank of Luxemburg. On June 9, 1955, she married Don Conard, beginning 60 years of mutual love and care. (“60 years, and it’s still not enough.”) She joined Don, who was stationed at an airforce base in Newfoundland, Canada, where their first child was born. During this time they made lifelong and loyal friends. Nancy and Don opened up their business, Conard Plumbing, Heating and Electrical, LLC, in Lark, Wisconsin in 1963, which they ran together until their retirement. After Don’s serious stroke in 2000, it was Nancy’s loving care that allowed him to come home and eventually make a nearly full recovery. She was an avid (and loud) Packer fan. She enjoyed the many trips that she and Don took together, from Hawaii to Australia to Bermuda and more. Weekends were often spent on Long Lake, where family joined them for campfires and more than a few Tom Collins. After retirement, Nancy volunteered for countless hours at Freedom House, St. Vincent DePaul and Bellin Hospital. Nancy was the rock of her family. Her children and grandchildren could count on her attending every volleyball, basketball, football game, band concert or whatever else each was involved in. Her grandchildren adored her and she was always there to step in and help. Her main concern, though, was her husband, and she reached her final goal, outliving him so he would not have to be alone. Nancy is survived by her four children, Mary (Donald) Swanson, Cheryl (Gil) Haight, Jerry (Jean Skornicka) Conard, Kevin (Cheryl) Conard; eight grandchildren, Lynn Sheka, Adam Sheka, Katherine Sheka, Emily Swanson, Heidi Swanson, Lauren Haight, Natalie Haight, a wonderful surprise granddaughter to be born in August; sister Natalie Montie, sister-in-law Rita Conard; brothers-in-law, Peter Arendt, Fr. Raymond Conard and John Stephan; nieces, nephews and cousins. Nancy was preceded in death by her husband Don; her parents; parents-in-law John and Sylvia Conard; sister Sharon Arendt; special aunts and uncle Rita Miller, Margaret and Elmer Mornard. Friends may call at St. Bernard Church, Green Bay, on Friday, April 29, with visitation from 10:30 am until 12:30 pm and funeral mass at 12:30 with Father Mark Vander Steeg, along with Deacon Robert Miller, presiding. To leave a message on Nancy’s Tribute wall please visit www.hansenfuneralservice.com. In lieu of flowers, a memorial fund will be established in Nancy’s name for Freedom House. The Conard family wishes to thank the Bellevue Assisted Living staff, Dr. Sabina Singh and Dr. Jaspreet Ahuja for their kind and compassionate care.

The family of Mrs. Nancy R. Conard created this Life Tributes page to make it easy to share your memories.

Send flowers to the Conard family.