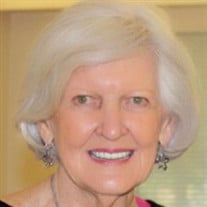 Barbara Ellen Barone, 87, (12-4-1933 to 12-12-2020), Barbara was born in Atlanta, Georgia, She died peacefully in the arms of her devoted husband, Louis in Green Bay, after courageously battling lung cancer and COPD. Barbara grew up in the Buckhead area of Atlanta and was raised by her mother and grandmother and attended Atlanta Public Schools. She graduated from North Fulton High School. Barbara furthered her education at Georgia Baptist Hospital to become a Registered Nurse. She later received her BSN Degree as a Registered Nurse from U.W.G.B . Barbara worked as a nurse at St. Vincent Hospital and later was an RN for Crawford Health and Rehabilitation until her retirement. Besides spending time with family and friends Barbara enjoyed her retirement from being a nurse. She was very active and used to like playing tennis with her friends. Barbara was an avid reader and would typically read 2-3 books a month and enjoyed belonging to a book club and formed many lasting friendships. She also liked playing word games. Barbara, a beloved wife, mother, grandmother will always be lovingly remembered and sorrowfully missed. May God keep Barbara in Peace. She married Louis J. Barone on September 8, 1956 in Atlanta at Christ the King Cathedral and began their life’s journey together. The couple just recently celebrated their 64th Wedding Anniversary. During their marriage they enjoyed an undying love for each other and a beautiful friendship. Barbara was a very faith-filled and active member of Resurrection Catholic Church. Her devotion was exemplified through her dedication to her husband, her family, friends and her community. Barbara is survived by her devoted husband Louis, her son Michael Barone and his wife Geralyn and grandchildren Theresa and Marcus, son Mark Barone and his wife Marina, Daughter Elisa Barone and partner Daniel Meyer, son Louis Barone, Jr. and his wife Surada. She is further survived by other relatives and many special friends. She was preceded in death by her Mother Martha (Mize) Bullard, and her grandmother Martha Bullard. In accordance with Barbara’s wishes, A private Mass of Christian Burial will be held for the immediate family at Resurrection Catholic Church. In lieu of flowers and other expressions of sympathy a Memorial Fund has been established in her name. The Barone Family would like to express thanks for the wonderful help, love and care from Home Instead, especially to: Rose, Erika, Anna and Chan. Also, a special note of appreciation to the staffs of Unity Hospice for all of their dignified care and devotion shown to Barbara and her family during her final days. Also, a special thanks to Aurora BayCare Medical staff including Dr. Raul Mendoza, Dr. Timothy Paterick, Dr. Vinay Mehta and Dr. Leah Nitke~ your kindness and compassion will never be forgotten.

Barbara Ellen Barone, 87, (12-4-1933 to 12-12-2020), Barbara was born in Atlanta, Georgia, She died peacefully in the arms of her devoted husband, Louis in Green Bay, after courageously battling lung cancer and COPD. Barbara grew up in the... View Obituary & Service Information

The family of Mrs. Mrs. Barbara Barone created this Life Tributes page to make it easy to share your memories.

Send flowers to the Barone family.