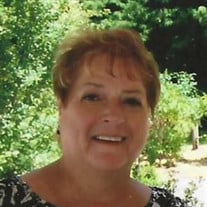 Mildred “Millie” Gmirek, age 71, entered eternal peace with her family by her side on May 5, 2022 at her home in Lena, WI. Her cause of death was pancreatic cancer. Millie was born on October 5, 1950 to the late Louis and Elizabeth (Nespala) Trudeau in Viroqua, WI. After her father’s death, when she was a young child, the family settled in Oconto Falls, WI. Millie attended St. Anthony Catholic School for elementary and intermediate schooling and was a 1969 graduate of Oconto Falls High School. Millie worked various positions within the administrative assistant line of work. She also spent nearly twenty years on the LeMere Family Farm where she raised her three children along with her first husband, Bill LeMere. In 1999, Millie began a new chapter in her life when she married her second husband, Robert “Bob” Gmirek. Millie and Bob loved riding motorcycle together. They were blessed with many wonderful trips on the bike. Millie enjoyed talking about the many beautiful parts of the country they were able to see and experience together. Millie also enjoyed spending time with her friends and family. Millie was known for her annual Kentucky Derby parties… Bring your hats and your betting money!!! Millie is survived by her loving husband of 22 years, Bob; three children, Mary (Fred) Rosner, Julie (Clay) Graceffa, and Tom LeMere; three step-children, Darlene Robbins, Mary Lou (Brian) Trauba, and Pauline (special friend Steve) Gmirek; four grandchildren; nine step-grandchildren; six step-great-grandchildren; three fabulous sisters, Betty (Jerry) O’Neill, Roseann (Tom) Roskom, and Marcy Podebradsky; and very best friend, Gloria Telford. In addition to her parents, she was preceded in death by her brothers Robert Trudeau and Raymond Trudeau, brothers-in-law Ted Podebradsky and Leo Gmirek, and sister-in-law Cathy (Paul) Port. A special thanks to Unity Hospice. Millie particularly enjoyed her visits with Chaplain Michele; thank you for bringing our family comfort during a difficult time. At Millie’s request, a funeral service will not be held. A Celebration of Life Party will be announced and held at a later date.

The family of Mrs. Mildred T. Gmirek created this Life Tributes page to make it easy to share your memories.

Send flowers to the Gmirek family.