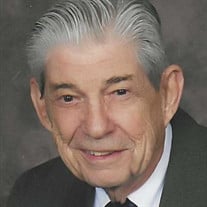 Merton (Jack) Fischer, 96, was born to the now late John and Ella (Reinhart) Fischer, in Tilleda, Wisconsin, in 1925. He grew up in Shawano, Wisconsin. During World War II, he served in the U.S. Army Air Force, 8th Air Force, out of England, from which he received an Honorable Discharge. In 1948, he married the former Caroline Kuchenbecker. He received an Electrical Engineering Degree from Marquette University and his Master’s Degree in International Management from Arizona State University. He lived in several countries other than the U.S. with his wife during his career. When he retired in 1989, they spent half of each year for 25 years in Puerto Vallarta, Mexico, where for six years, they owned and operated a small resort. While living there, they and another couple started an English-speaking service in a small Spanish-speaking church. They also began an English service in their home while living in Costa Rica with members of the Latin America Mission. Both groups are still growing with financial help from U.S. churches. Two sisters preceded him in death: Angeline Fischer of Birnamwood, Wisconsin, and Burnell Laux of Aiken, South Carolina. His wife, Caroline, survives him: as well as one son: John Fischer, and his wife, Sandra, of Elkhart, Indiana: one daughter, Jean Friedline, and her husband, Patrick, of Cary, Illinois, and six grandchildren and two great-grandchildren who all live in Texas, Pennsylvania, Washington D.C., Indiana and Illinois. A Memorial Service will be held at 11:00 A.M. on Saturday, May 21, 2022, at Bethel Baptist Church, 1601 Libal Street. Friends may call from 10:00 A.M. until the time of the Service. In recognition of his dedication to his Country, Military Honor Rites will immediately follow the Service. Inurnment will be in the Nicolet Memorial Gardens Mausoleum. Condolences can be sent to the Fischer family at Hansen Family Funeral Home. In lieu of flowers, a tribute gift can be made to the Alzheimer’s Association. The family extends gratitude to Heartland Hospice and Bellin Hospital for earlier care.

Merton (Jack) Fischer, 96, was born to the now late John and Ella (Reinhart) Fischer, in Tilleda, Wisconsin, in 1925. He grew up in Shawano, Wisconsin. During World War II, he served in the U.S. Army Air Force, 8th Air Force, out of England,... View Obituary & Service Information

The family of Mr. Merton Harley Fischer created this Life Tributes page to make it easy to share your memories.

Send flowers to the Fischer family.