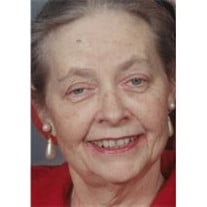 Mary Louise Roettger Thompson, age 83, died early Friday, Feb. 1, 2013, in Green Bay, WI. Born in Cincinnati, OH, on June 24, 1929, to Louis G. and Louise E. Roettger, Mary was the oldest of five siblings. When she was a child, her family moved to Greenhills, a green-belt community built during the New Deal. She often spoke of the joys of growing up where green space abounded and the residents formed close bonds; Mary had great respect for Franklin D. Roosevelt, and she remained a staunch Democrat throughout her life. In Greenhills, Mary played the tuba in the marching band and sang alto in the “Triple Trio.” An excellent student, she became salutatorian of her high school class. Mary was active in the Greenhills community church under the leadership of Rev. Bill Hawley, who helped her become the first person in her family to go to college. She began her college education at William Penn College in Iowa, where she developed a lifelong interest in art and art history. Living and working in Chicago, Mary met a young seminarian, Robert O. Thompson. They began a lifelong romance and they married in Chicago on Sept. 2, 1950. The couple moved to Champaign, IL, where Robert served as a minister and Mary finished her bachelor’s degree in psychology with a teaching certificate at the University of Illinois. When they returned to Chicago, Mary taught third grade until her children were born, then worked at home for a correspondence school while wholeheartedly and creatively embracing the career of parenthood. As the children grew, she worked outside the home as a librarian, a human potential group leader, and a real estate agent. She loved reading and discussing books, and instilled that love in her children. Mary also enjoyed vacationing with family and friends on Lake Michigan. In 1970, the family traveled in Europe and lived in Cambridge, England. She explored the art museums and historical sites, created a number of brass rubbings in ancient churches, and took oil painting classes. Mary thrived on new adventures in the company of her husband and children. After the Thompson family moved to West Bend, WI in 1973, Mary attended graduate school. She obtained a master’s in educational counseling from the UW-Milwaukee, and began her career as a guidance counselor at West Bend High School. She had found her nitch. Mary had a natural rapport with youth and a fiery concern for their well being. Her career came to an end when she was diagnosed with cardiomyopathy. The prognosis was poor. Mary participated in several clinical trials; she was always grateful to Dr. Francis Wolfe, whose experimental treatment helped her survive. She received several medical death sentences during her remaining 25 years of life! Mary loved people and found them endlessly fascinating. Perhaps as result, people were drawn to her. She could often be found counseling strangers in the line at the grocery store or in waiting rooms! Mary maintained her warm sense of humor with people even during her late-life struggles with dementia. In retirement, she and Robert enjoyed extended visits to Michigan and Florida. After her husband’s death in 2003, Mary moved to Green Bay to be near her daughter, Ann, and family. She lived at the Bellevue Retirement Community, and later at Angel’s Touch Assisted Living. Mary is survived by three daughters and their families: Margaret (Peggy) and Robert Baum of Columbia, MO; Ann and Randy Derge of Green Bay, WI; and Katherine (Kate) and Richard Thompson-Feirn. Her eight grandchildren and spouses are Elizabeth Talbert (David Fautsch), Meredith Talbert, Ellen Derge (Michael Tomaloff), Carlin Derge, Joseph Derge, Leah Thompson-Feirn, Erick Thompson-Feirn, and Julie Thompson-Feirn. She is also survived by her siblings: Carol Kinsworthy, Margaret “Peggy” Lohstroh (Edward), Roberta “Ginger” Lucas, and Lou Roettger (Nancy); and sisters-in-law, Phyllis Thompson (Bruce Mathis) and Kay Thompson; and many nieces and nephews. Mary was preceded in death by her husband, Robert O. Thompson, her parents, Louis G. and Louise E. Tryon Roettger; and her grandparents, Margaretta D. Geier and Louis H. Roettger, and Margaret Bridget Hoctor and Henry Albert Tryon. Parents-in-law, Alice M. and R. Melvyn Thompson, and brothers-in-law Thomas E. Lucas, Donald D. Kinsworthy, John M. Thompson, and William B. Thompson also preceded her. Events to celebrate the life of Mary R. Thompson will be conducted Thursday, February 7, 2013 at First United Church of Christ, 509 S. Webster Avenue, Green Bay, WI. Dr. Robert Laubenstein and Reverend Laura Hawkins will officiate. Visitation begins at 9:30a.m. The service starts at 11:00 a.m., with informal remembrances to follow. Interment will be at Crystal Lake Cemetery, Frankfort, Michigan. Memorial donations may be made to Progressives United, P.O. Box 620533, Middleton, WI 53562; The Parent Project Muscular Dystrophy, 401 Hackensack Avenue, 9th Floor, Hackensack, NJ 07601; or the Cincinnati Zoo, 3400 Vine Street, Cincinnati, Ohio 45220-1399. “Today we lost our matriarch, Mary Louise (Roettger) Thompson, my grandmother. She was the smartest woman I have ever known. Her favorite color was red. She loved daisies and crossword puzzles. She had a big heart and a kind word for everyone. She read Mother Jones magazine and idolized FDR. She will be greatly missed.” –Ellen Derge

The family of Mary R. Thompson created this Life Tributes page to make it easy to share your memories.

Send flowers to the Thompson family.